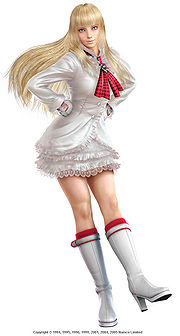 Since her coming in Tekken 5: Dark Resurrection, she has been labelled as one of the infamous 'mashing' characters, along with Eddy Gordo and Christie Monteiro. Although this is partially true, mashing is not the best way of maximizing her potential.

Lili is an easy, relatively powerful character that many new players pick up (due to her "attractive" animations).

Lili's place in the tier is widely agreed in mid to high-mid. Her lack of tracking moves, lows, and range forces her to forfeit a place in the top tier. Arcadia Magazine Tier Ranking (January 2007) placed Lili in RANK B+, with Anna and Marduk as good match-ups, and Feng and Asuka as bad match-ups.

When beginning a round, as with most other characters, it is encouraged that the player back-dashes. With Lili, you can also twirl into Rabbit's Foot (b+4~3), but it is ill advised to use this opener every round, as it will soon be blocked on reaction. You can also twirl and qcf into Vine Slash (b+4~f~1) or Angel Heart (b+4~f~2) which are more options for starters. All her throws lead to great wakeup games. She has great mids and decent lows.

Direct Persuasion (d/f+1) – Fast mid that gives advantage on block. Use this for mind games, mix it up with jabs and throws, or attempt a launch after almost every time this hits. It makes most people afraid to duck just because it comes out so fast.

Vine Slash (qcf+1) – Evading mid launcher that has a lot of range, and goes under highs and some mids. Jab punishable, but that is the only negative thing about it.

Capricorn Kick (u/f+3) – Mid launcher that crushes lows and can be used if your opponent whiffs almost anything. It's fast enough that if you were block something low that is unsafe, you can do this move right afterward rather than a WS move. Also this move is guaranteed after both low punch and low kick parry. This move is also great to use against wakeup kicks, or any other wakeup moves your opponent has because it will fully launch them into the air. It can even catch back rollers. It is merely jab punishable and is worth the risk.

The first hit of Heavy Languish (d+1) – Low which tracks a bit to her right and high crushes. Moves you forward slightly, and hits a grounded opponent for decent damage.

Edelweiss (d/b+4) – Low which juggles on CH and high crushes. This also hits grounded. Risky, as it is very readable and very punishable.

Freesia Thrust (d/b+3) – Low which knocks down on hit, high crushes, and in FC, d/f+3 is a guaranteed followup. It hits grounded as well and may knock your opponent down again if you use it in your oki game. It's also somewhat hard to read. However she jumps a little before hand and can be jabbed out of it.

Root of Evil (f,f+4) – Low that's basically unseeable and gives you great advantage on hit. Doesn't knock down, but will stun Lili's opponent on CH. Also, on CH, if they don't break the stun you get a free launcher (either u/f+3 or d/f+2). This is her only low move that is not launch punishable. Great mix-up with f,f+3. The only bad thing about this move is that it can be easily stepped and it's best to use if you're keeping the pressure on.

Horizon Slide (FC, d/f+3) – Long range low with even more phantom range on it as it grinds to a halt. Tracks both sides insanely well and high crushes. Also juggles on CH. Works great right after a forward dash. Even if it's not incredibly safe, it has a ton of range and can catch people off guard. If you side step before it, sometimes she will slide right through them and they can't punish it.

Circle Knee (f+3) – Short range mid that does a good amount of damage for a single safe and relatively fast move, and it knocks down on regular and counter hit. It's great for catching sidesteppers. It is still unsafe on block, however, it pushes your opponent very far back and to the side making it essentially unpunishable. Lili is easily sidestepped so if you find your opponent is side stepping a lot, throw this out to keep them from doing that.

Arch Kick (f+4) – High that gives frame advantage on block. Great for setting up CH's and keeping the pressure on against the wall. It can be ducked however.

For 15f, Capricorn Kick (u/f+3), which launches for juggles.

For 17f, Vine Slash (qcf+1), which launches for juggles, or Bloody Masquerade (d+2+2), an advancing and slightly tracking mid-high string that’s NC, even when delayed. If you catch the second 2 on CH, finish the string (d+2,2,4) for nice damage.

For 18+f, Matterhorn Ascension (d+3+4), which launches for juggles. It's ultra punishable on block but the damage that you get from this launcher is ridiculous. Ducks down so low that not only does she crush highs, she avoids some mids as well. This also works after a low kick parry.

For 15f, Capricorn Kick (u/f+3), which launches for juggles.

For 18+f, Delicate Uprising (ws2), which launches for juggles. This move is not safe but not horribly unsafe however. It won't work on many lows because it is kind of slow, but still it has a lot of range and is a great launcher. If your opponent techs, you catch them with this, and you can hit them with d+1,2,4 afterward.