In the beginning, Namco wanted to have a female Capoeirist, but at the time, felt unsure, prompting them to create Eddy Gordo in Tekken 3. In the next one, Namco had enough confidence to release Christie as a new character, and she was well-received. With her almond-brown eyes, tanned skin, curvy figure and colorful clothing, she added sex appeal and a playful style to the series. She is seen to care deeply for those in her life, mainly her grandfather and her master Eddy Gordo. Many fans see a possible love interest between the two due to the closeness and intimacy they express toward each other, but so far any romantic evolution has been left to speculation and Namco's ambiguity. Interestingly enough, Eddy is actually listed among the characters who Christie hates being paired with in Tekken Tag Tournament 2's allegiance chart. 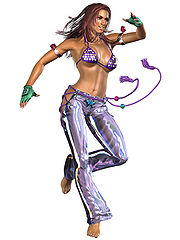 Prologue (In-Game Text)
Christie is the granddaughter of the Capoeira master who taught Eddy Gordo the art of Capoeira during his incarceration in prison. While in prison, Eddy swore an oath to the master to pass on the art of Capoeira to his granddaughter. Eddy sought out Christie shortly after his return from The King of Iron Fist Tournament 3 and taught her the art of Capoeira, just as he promised his master. After only two years of tutelage, Eddy turned Christie into an impressive fighter. But soon thereafter, Eddy abruptly disappeared, leaving Christie only with the words, "I must seek vengeance against the enemy responsible for the death of my father." Troubled by his sudden and mysterious disappearance, Christie chases after Eddy with her only lead — The King of Iron Fist Tournament 4.

Ending (Unofficial Synopsis)
Christie Monteiro has defeated Heihachi Mishima and won the tournament. The audience is cheering for her, and people are walking up to her, taking photos of her and complimenting her about her victory. One man starts to interview her about her victory, and Christie is very nonchalant throughout this. A man in a suit walks up to her, holding a golden trophy that is shaped like Heihachi's head. Christie looks through the crowd and sees Eddy, who has a sling on one of his arms. Christie starts to run up to him while yelling, "Eddy!", twice. An echo of her saying this is heard after the second time she says it. Christie runs up to him and hugs him. Eddy hugs her with his other arm (the arm that doesn't have a sling around it). Christie says, "Eddy...", and then she closes her eyes and smiles. 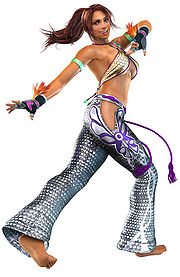 Prologue (In-Game Text)
Christie Monteiro, the granddaughter of a Capoeira master. After he grandfather was released from prison however he has become a very weak man. This was not the grandfather she know. Christie had her grandfather hospitalized, he was told that he was ill. But a cure would be possible from the Mishima Zaibatsu. Christie learns of the King of Iron Fist Tournament 5 and decides to enter thinking it be a chance to save her grandfather.

Interludes (Unofficial Synopsis)
Stage 4, Bruce Irvin: Bruce looks at Christie and says, "Well! The competition certainly has gotten easier on the eyes." Christie replies, "I doubt you'll think of me that way after I'm through with you." Bruce says, "You wanna see how long your Capoeira stands up to my kicks?" Bruce slaps one of his knees with one of his hands. Christie answers, "Absolutely." After Christie wins, Bruce is knocked to the ground. Bruce says, "Pretty tough!" Christie holds up one of her index fingers and shakes her hand while going, "Tsk, tsk, tsk." Then, she says, "You have no rhythm. You'll never be able to beat me." Christie smiles, turns around, and walks away.
Stage 7, Eddy Gordo: Eddy tells Christie that the tournament is too dangerous, and that he wants her to go home. Christie refuses, asking him how he can expect her not to do anything after she's seen what happened to her grandpa. Eddy says he has no choice and prepares to fight Christie. After Christie wins, Eddy is shown laying on the ground. Christie looks down at him and promises to come back to him.
Final Stage, Jinpachi Mishima: Christie walks through Final Stage 2. Jinpachi (in human form) walks up behind her and says, "I'm impressed that you've made it this far. I am Jinpachi Mishima. My goal... My goal is to destroy all existence!" Shortly after Jinpachi starts to speak, Christie turns around and notices him. After he finishes speaking, Jinpachi transforms into his "Devil" form.

Ending (Unofficial Synopsis)
Christie and Eddy are sitting outside of the operation room, and Eddy is seen waiting hopelessly, while Christie is seen praying. The light on top of the door (which says 'Operating') goes off. The scene changes. Eddy and Christie are outside training, but Her grandfather also arrives, interrupting one of Christie's kicks. Delighted, she begins practicing with her grandfather as Eddy watches the two. 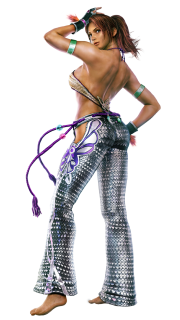 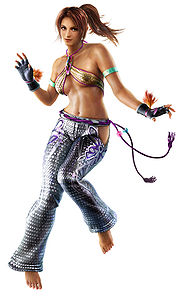 Ending (Unofficial Synopsis)
Christie is shown standing at a grave with a coffin that hasn't been buried yet. Her grandfather has died. Christie places both hands together and weeps for her fallen grandpa. Suddenly, Eddy Gordo arrives and stands next to her. Christie slaps him in the face asking him where he was, but then gives up and places her hands and head onto his chest as she cries. Eddy clenches his fist and throws a badge to the ground, breaking it slightly. Jin Kazama's branding/tattoo is shown on the triangular shaped badge. 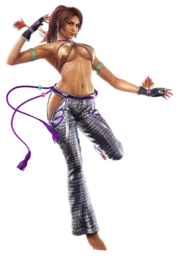 Christie is featured as a playable character in Tekken Tag Tournament 2.

Christie Monteiro is the granddaughter of the very same capoeira master that instructed Eddy Gordo. While her grandfather was imprisoned, Eddy continued her capoeira lessons, turning her into a formidable fighter. After her grandfather's release, he was struck by an incurable disease and had to be hospitalized. One day, he mysteriously vanished from the hospital... along with Eddy. Fearing the worst behind the reason for their disappearance, she searches relentlessly for them[1].

Christie is seen chasing after Eddy inside a train station. She loses him after a luggage cart gets in her way. She decides to try and look for Eddy on a balcony, but fails to spot him. She decides to go down stairs to find Eddy. After running through the crowd she finally manages to find Eddy. A train however comes in between them, forcing Christie to wait longer. Before she can enter the train Christie spots a small child crying, and stays with the child before her mother arrives. When the mother arrives, Christie is too late, and the train begins to move out. She repeatedly shouts out Eddy's name to him when she finds his seat, but Eddy ignores her. She then falls to her knees in failure as the train leaves.

Christie is featured as an unlockable character in the free-to-play online game Tekken Revolution. She was added in the October 30, 2013 update ([1]). As with the rest of the cast, her appearance and moveset are carried over directly from Tekken Tag Tournament 2, though with the addition of a new kick, and the command for one of her moves being changed (see below). 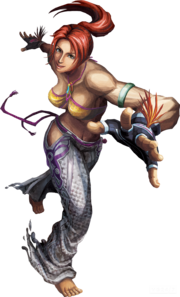 Christie will be featured as a playable DLC character only in PS3 and PSP Vita.

Christie is searching for her teacher, Eddy. Who has disappeared once again. Lei Wulong is searching for Eddy as part of his own investigation. their only lead is a man matching Eddy's description. spotted among Shadaloo and Mishima Zaibatsu forces that are searching for Pandora in the Antarctic.

Lei: I don't know if the rumors are true or not. but it's not like we going to find anymore information here. I'd really appreciate it if you tag along on this one'.

Christie: There's so much i need to tell Eddy. if there's even a chance that I'll find him there of course I'm willing to go

Christie agrees to work with Lei to find Eddy in the Antarctic. and stop Pandora from falling into the wrong hands.

Lei: Ready to get a move on Christie?

As Lei reminds Christie that they weren't the only ones going for the box he points out a strange team of a Brit (Dudley) and a Kenyan (Elena). As it turns out the two were nearby and Elena eagerly challenged Christie to fight, much to Lei's displeasure.

Lei informs his superiors that the white light that suddenly appeared had no signs of radiation on him or Christie. Later he spots Eddy who tells him that extraction had been cancelled. Lei angrily tells Eddy that Christie had gone through the entire world looking for him, but he is just asked by Eddy to tell Christie to forget him. Later Lei apologizes for not stopping Eddy but Christie decides to continue her search. 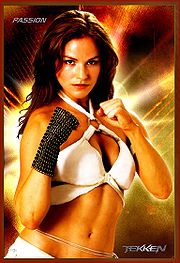 Christie appears in the Tekken Movie as one of the main protagonists. She plays a significant part in the movie as she helps Jin and encourages him to carry on and fight. In the tournament she defeats Nina. She is also Jin's romantic interest during the tournament. Christie has no connections to Eddy in the movie, and is Caucasian instead of Latin descent, and does not fight with Capoeira only Baguahang.