In Tekken 7, Eliza made her surprise canonical appearance as one of the game's DLC characters but could be unlocked as a pre-order bonus. 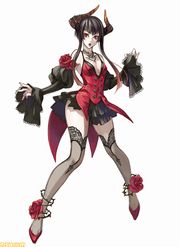 Eliza is featured as a paid DLC character in the console version of Tekken 7, early access is provided for those who pre-order the game.

Like Akuma, Eliza uses a meter for herself and has EX versions of moves.

Eliza was only supposed to take a short nap, but she ended up sleeping for 600 years. Upon awakening, she found her powers as a vampire had faded to nothing. In an attempt to restore her strength, she consumed the blood of several victims. However, it wasn't enough.

What she needed was the blood of someone with an intense spiritual force? Maybe then she would return to peak condition. But did such a person even exist in this era? No-one sprang to mind.

Left with no other choice, Eliza headed for the old HQ of the clan of exorcists who had caused her no end of trouble when she last prowled the nights. Perhaps some of their descendants were still alive.

Scoffing at Claudio's lack of abilities, Eliza is greeted by Lili, who was aware of Eliza's imprisonment under the Rochefort Estate. While Lili states that she is Eliza's sister, Eliza expresses her doubts as she was born a thousand years ago, but she falls asleep before she can finish her statement. Soon Lili makes many angered statements to wake Eliza, only for the vampiress to fall asleep again before completing her statements. Exasperated, Lili simply tells Eliza to drink less blood and more coffee.