From Tekkenpedia
(Redirected from Claudio)
Jump to: navigation, search

Claudio Serafino (クラウディオ・セラフィーノ Kuraudio Serafino) is the second new playable character in Tekken 7 spotted at the Tekken 7 Location Test which was held in Tokyo and Osaka from October 3 to 5, 2014[3]. He also can utilize his powers to conjure energy during the fight, even creating an arrow of energy for his rage art.[4]. 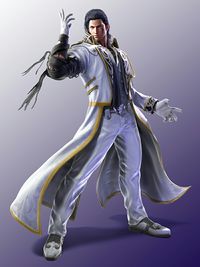 The Archers of Sirius are a group of exorcists who have been banishing supernatural entities from this world since ancient times. A highly secretive organization, its existence is unknown to the public. Although it is not known how their existence was revealed, the Archers of Sirius were suddenly approached by the Mishima Zaibatsu. They were heavy-handedly requested by the Mishima Zaibatsu to join their conglomerate but naturally refused. This did not stop the persistent pressure from Mishima Zaibatsu, however.