Sake (pronounced Sha-kay) is an irregular character that made his only appearance in the Arcade version of Tekken 3. Sake uses Yoshimitsu's Tekken 3 model, and Jin Kazama's moveset. For some time it was believed by fans that Sake was a prototypical version of Steve Fox. Sake was also going to be a middle boss before Ogre, and Kuma was originally planned to fight holding a large fish, which may have been Sake. Katsuhiro Harada revealed the following in a forum post on August 1st 2010:

"Regarding 'SAKE', this was included when we planned to implement a new animal character. But there were a few problems...

It was really a salmon so, no matter if you press punch or kick, the character just flops around making a flapping noise... At the time, one play was 100 yen (a little over a dollar) so that is the quality bar to keep in mind for customer satisfaction. So we thought players would get quite angry if they had to pay that much to play such a character, and we gave up on that character. That kind of character might be OK in a console version, but not for the arcade"[1].

The concept of Sake returned during a poll for Tekken Revolution's original character. The poll, however, was won by Eliza, and Sake did not receive a sizable amount of votes. 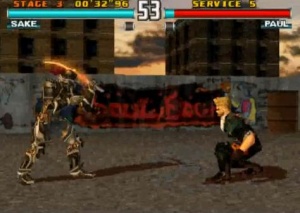 Sake was rather populating the game as the game had already got 20 characters at that time. Namco's production team probably didn't have much time to re-do the whole code for character selection, so they buried the two raw characters in an as-is condition.