Sebastian (Français: Sébastien; Japanese: セバスチャン Sebasuchan) is a character in the Tekken fighting game series. He is Lili's butler. His first two non-playable appearances are in Tekken 5: Dark Resurerection and Tekken 6, and in both he appears in Lili's endings, normally commenting on how proud he is of her. Sebastian is also mentioned by Lili in two of her win animations: "(Sighs). Sebastian, can't you do better than this?" and "Sebastian, they say they're leaving already". Not much else is known about him. His third appearance is as a playable character in Tekken Tag Tournament 2, where his move-set is almost identical to Lili's. Also, like Lili, he now speaks French instead of English.

In Tekken Tag Tournament 2, Sebastian appears in both Asuka and Lili's endings remarking to how Lili is determined to fight Asuka once again. He is also seen in Wang's ending, joining Wang, Jinpachi and Doctor Bosconovitch regarding their existence in the Tekken series. Sebastian only comments that he lives to serve Lili, though wouldn't mind the idea of immortality or being a cyborg.

*only in Lili's ending for that game

Sebastian in his first appearance in Lili's ending

Sebastian appears briefly in Lili's ending. His only line is: "Truly splendid, Miss Lili." in response to Lili announcing how thrilled her father will be now she's taken care of the Mishima Zaibatsu. Lili replies, "Sebastian, you're too much. I only did what any daughter would do.", and then she starts laughing. What they don't realise is that Rochefort Enterprises is now bankrupt.

Sebastian appears once more in Lili's ending. While Lili and Asuka are fighting off-camera, Sebastian gets out of the Rochefort limo, unaware of the situation, and says "Brilliant. She's already making friends. I'm so proud of her." 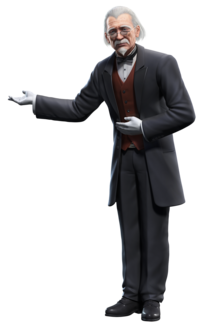 Sebastian is featured as a DLC character in the console version of Tekken Tag Tournament 2.

Sebastian's moveset is based off of Lili's fighting style, however, he retains moves that Lili has "forgotten" throughout her appearances.

Story (Translated from the Official Site)

The butler who serves the Rochefort Family. With good-natured personality, unlike the current Rochefort householder, he approves Lili's desire to street fighting and supports her from the shadows. Pleased about Asuka Kazama whom Lili regards as a rival, Sebastian thinks that a good friend was able to do it.

Butler of the de Rochefort family, Sebastian serves with the same gentle demeanor as the head of the household. He worries endlessly about Lili and her secret hobby of street fighting. On such an outing, as Sebastian was following her into the city, he got caught up in one of Lili's brawls...[1]

Sebasitan is driving Lili's limo, with Lili herself sitting in the backseat. There is an awkward silence and so Sebastian suggest some music "to lighten the mood". He turns the radio on where the spokesman announces that the winner of the King of Iron First Tournament is Sebastian himself. Shocked, he flicks through other radio stations only to find them all congratulating him on winning. Now annoyed, Sebastian attacks the radio to try and turn it off. He succeeds and stops the limo, opening Lili's door to let her out. Lili congratulates Sebastian before walking off, leaving Sebastian overjoyed. [1]