Roger (ロジャー Rojā) is a character in the Tekken series who made his first appearance in [[Tekken 2]] and his last appearance in the non-canonical game Tekken Tag Tournament. Roger is a kangaroo that was made by Doctor Bosconovitch for the same purpose as Alex. Jun Kazama later arranged for Roger and Alex to live out their lives in Australia.

His title in the original trilogy is Animal Commander.

*only in Roger Jr.'s ending 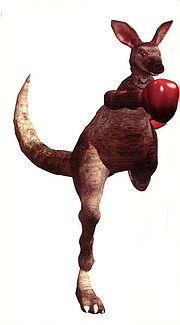 Prologue
Both Roger and Alex are the results of a military experiment. Doctor Boskonovitch wanted to combine the genes from a martial artist and cross them with wild animals. It is rumored that Doctor Abel has stolen Roger and Alex and is keeping them with him in his secret laboratory.

Ending, "Wild Roger" (Unofficial Synopsis)
A countdown (from 3) of a wildlife documentary is shown before the start of the scene. A traffic sign is seen with the words "Roger won" on it. A herd of kangaroos are hopping along the Outback. Before the finish, the scene is rewound and Roger can be seen running through the herd with his enhanced mind. The scene ends showing Roger waving a boxing gloved fist at the camera. 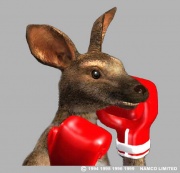 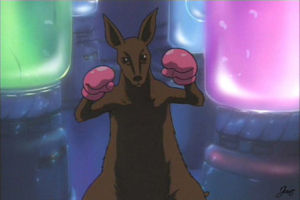 Roger is featured in Tekken: The Motion Picture. He is spotted by Lei Wulong while he and Jack-2 search for Doctor Bosconovitch. When Roger and Lei meet face to face, Lei cries "What the hell is that thing?!" It is unknown what happened to Roger after the tournament, since he was not seen beyond this scene.

Retrieved from "http://eng.tekkenpedia.com/index.php?title=Roger&oldid=83333"
Categories:
Login to remove all ads