An African American well-versed in Muay Thai Kickboxing, Bruce lost his family, consisting of his parents and older brother, to gangsters. This would force him to live in the grueling streets alone, but this would further strengthen him, and eventually, he became recognized around as a ruthless fighter, maximizing his Muay Thai skills and his mind to inflict maximum pain against opponents.

His life would change, when he was paid to lose a fight in Thailand, but Bruce beat his opponent to death in a double-cross. He would then live life on the run as the bookie had paid someone to kill Bruce. Bruce would eventually confront the killer, as well as a Hong Kong detective on a plane. The ensuing fight between the three caused a plane crash, which caused Bruce to suffer amnesia. On being approached by Kazuya Mishima's men, Bruce saw little choice and decided to work for the Mishima Zaibatsu. They would form a partnership so strong, that they would help each other once again, after 21 long years.

During these years, one can speculate that Bruce was attacked by Ogre, as Ogre possesses some of Bruce's moves, such as his "Foot Bazooka" and "Double Elbow."

Bruce's occupation, however, showed that he was recruited after Kazuya's death to be a trainer for survival techniques. Surprised with Kazuya's reappearance despite his supposed death at the hands of his father Heihachi, Bruce left for the King of Iron Fist Tournament 5, in order to meet Kazuya. Upon meeting the man, the two once again became partners and pitted themselves against G-Corporation. They slaughtered its highest ranking members, allowing Kazuya to take control of the company. Bruce would, later on, become Kazuya's right-hand man once again, and would serve as G-Corporation's leading general in the fight against the Mishima Zaibatsu. With Kazuya creating a bounty on Jin's head on the sixth tournament, Bruce set out with new objectives.

In general, Bruce's ferocious style, and seemingly "chill" personality, all hail from his background. With the loss of his family, and being forced to live by fighting, Bruce became a bitter man, doing whatever he saw fit in the situation. It was also because of this that Bruce has shown a distinct and particular dislike for gangsters, and anyone else of the sort. One of the main noteworthy story points in Bruce's life would be his meeting with Kazuya. Together, Bruce would brave various hardships, not once, but twice for Kazuya, showing a very strong and close comradeship. Another distinct note is that Bruce is still very fond of children, and he particularly makes it a point to protect and encourage the children, especially when they are bullied or are attacked by gangsters.

His title in the original trilogy is Nightmare Impact.

In the kickboxing circle, Bruce has carved a niche for himself. He became the undisputed heavyweight champion five years before The King of Iron Fist Tournament 2. His ferocity and uncompromising technique dominated all the competition. It is thought that the reason for his temper and nature is due to the fact that, at an early age, his parents, and brother were killed, which left Bruce on the streets having to fight on a daily basis just to survive. He learned to inflict great pain on his victims. He accumulated a small amount of money competing in pit fights and brawls. He lives for the fight! He entered a Muay Thai tournament in Thailand, where he was paid to rig a fight and lose. Bruce decided otherwise and beat his opponent to death. The bookie of the Muay Thai gym, enraged at his loss of revenue, sent a hired killer after Bruce. He fled the country by plane, only to meet a Hong Kong detective and the hired killer. Within minutes, the three confronted each other. It developed into a full-blown battle, which caused the plane to crash. The detective (Lei Wulong's partner) and the killer were killed on impact, but Bruce was thrown free. Wandering in a remote region, Kazuya's men picked him up, and he was given a new job as Kazuya's combat champion.

Ending Description
A boy watches as Bruce practices. Noticing this, Bruce smiles. Bruce lands a couple of hits on the punching bag, breaking it off the chains. Shocked, the boy falls to the ground. Bruce opens the window and gives the boy a thumbs up. 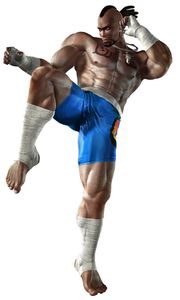 Prologue (In-Game Text)
Bruce Irvin, once a mercenary for Kazuya. Bruce left Kazuya's militia 21 years ago and wound up in a survival school. A few years later, he heard Kazuya died. Then one day he heard Kazuya had fought in The King of Iron Fist Tournament 4. He also learned that the Zaibatsu would soon hold The King of Iron Fist Tournament 5. The seasoned veteran sensed something was going on behind the scenes. He wondered who or what it could be. "I need some action. Maybe I'll go have some fun with the Mishima Zaibatsu." says Bruce.

Interludes
Stage 4 Steve Fox: Steve tells Bruce to go home because of his age, but Bruce tells Steve to respect his elders. After Bruce defeats Steve, Bruce says, "You're lucky I didn't break your arm, kid!", then he wonders where Kazuya might be.
Stage 7 Kazuya Mishima: Bruce tells Kazuya that unlike 20 years ago, they're equals. Kazuya disagrees. When Bruce wins the fight, he says that he was gonna go along with the Zaibatsu's charade, but notes that "this is pathetic."
Final Stage Jinpachi Mishima:Bruce walks through Final Stage 2. Jinpachi (in human form) walks up behind him and says, "I'm impressed that you've made it this far." (Bruce turns around hearing Jinpachi's voice) "I am Jinpachi Mishima. My goal... My goal is to destroy all existence!" After he finishes speaking, Jinpachi transforms into his "Devil" form. 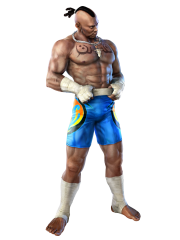 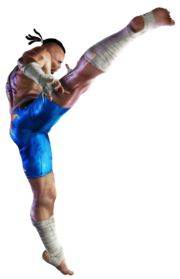 Prologue (In-Game Text)
During The King of Iron Fist Tournament 5, Bruce reunited with Kazuya Mishima and aided him in his plot to take over the G Corporation. The G Corporation, controlled by Kazuya behind the scenes, began a war with the Mishima Zaibatsu. As the leader of a private force reporting to Kazuya, Bruce traveled the globe, eliminating Mishima Zaibatsu operatives.

When Kazuya’s plan to destroy the Mishima Zaibatsu began, the G Corporation put a bounty on Jin Kazama's head. Then, just as expected, the Mishima Zaibatsu made its move and announced The King of Iron Fist Tournament 6. In spite of the obvious ambush that awaited him, Bruce entered the tournament for a chance to capture Jin and the reward.

Scenario Campaign (Unofficial Synopsis)
After becoming reacquainted with Kazuya Mishima at the King of Iron Fist Tournament 5, Bruce Irvin decided to assist Kazuya with his scheme to take over G Corporation, and after they had succeeded Kazuya managed to control the corporation from behind closed doors. G Corporation waged war with the Mishima Financial Group (MFG), and Bruce, as Kazuya’s Captain, led Kazuya’s private corps into battle, fighting the MFG the world over. Soon afterward, G Corporation made preparations to annihilate the MFG by placing an enormous bounty on Jin, and as anticipated, the MFG began to show signs of movement: the opening of King of Iron Fist Tournament 6 was announced. Bruce Irvin has entered the tournament to capture Jin…

Bruce is seen leading a group of military soldiers (presumably from G Corporation) against what appears to be the Mishima Zaibatsu. His men cover for him as he takes out several enemies and machine guns. Eventually, all of the enemy forces are captured. Bruce then calls HQ, telling the person on the other side of the line that he won a bet between them. The receiver tells him to clean up, but Bruce replies that he does not need to be told twice. He then rallies up his troops. 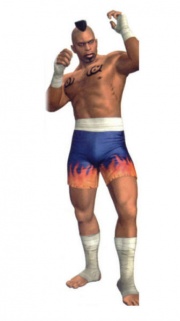 Bruce Irvin is featured as a playable character in Tekken Tag Tournament.

Ending (Unofficial Synopsis)
The camera approaches Bruce, whose back is facing the screen. Bruce turns around and throws many punches and a couple of kicks. Afterward, it is revealed that Bruce beat up many Tekken Force members, Heihachi Mishima, and Kazuya Mishima. This ending takes place in Heihachi's Tekken Tag Tournament stage. 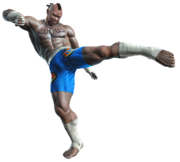 Bruce Irvin is featured as a playable character in Tekken Tag Tournament 2.

Bruce Irvin held a reputation as part of Kazuya Mishima's private forces. After Kazuya split off from Heihachi Mishima, he roamed between different national forces and worked as a survival skills instructor. One day, he was reunited with Kazuya, whom he thought had died. He decided to support Kazuya's master scheme and succeeded in hijacking the G Corporation. The leader of private force reporting to Kazuya, Bruce traveled the globe, decimating Mishima Zaibatsu forces[1].

Ending (Unofficial Synopsis)
Bruce is seen running past people with high desperation. He manages to reach his destination, in the middle of a road, but he ends up startling a driver. Before the car can hit Bruce he manages to flip the car by smashing the engine with an elbow strike. He then picks up the chick that he had saved while the car he attacked earlier explodes behind him.