This article is about the first robot in the "Jack" series. For the article about the series of "Jack" robots, see Jack (series).

Jack made his first and last appearance in Tekken, because Jack was replaced by Jack-2 in Tekken 2. Jack's rival is Prototype Jack, who would reappear in Tekken 2 and become Jack-2's rival.

His title in the original trilogy is Super Killing Machine. 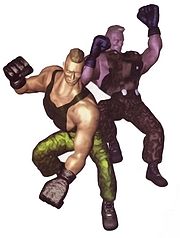 Prologue (Manual)
This military cyborg was originally developed as a shock weapon. Jack's handlers sent him to the tournament to get rid of Kazuya when they got wind of his plans for a world coup d'état. Nothing but a robot could boast his violent attacks and stupendous power.

Ending (Unofficial Synopsis)
Jack is strapped onto a machine that connects him to dozens of other Jacks. His information is downloaded to them. "Danger."