True Ogre is the final boss for every fighter in Tekken 3, along with its other form, Ogre. True Ogre is the true form of Ogre, as well as his stronger form. Once Ogre is defeated once in Arcade mode by the player, Ogre will absorb Heihachi Mishima to transform into True Ogre. However, if the player chose Heihachi and defeated Ogre with Heihachi, Ogre will absorb Jin Kazama instead. True Ogre has all of Ogre's moves, with the exception of "Ancient Power" (During enemy's attack b+1+2), but True Ogre has some extra moves, such as flying, breathing fire, and teleporting. 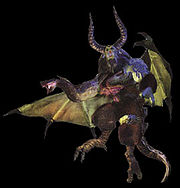 True Ogre's fighting style is pretty much the same as Ogre's fighting style, which is essentially a combination of moves used by other Tekken characters. True Ogre also has Ogre's "Serpent's Venom" (f,F+2") and (only in Tekken Tag Tournament) "Azteca Shoot" (SS+4) moves. True Ogre also has unique moves of its own based on its changed physical appearence, such as "Hell's Flame" (1+2) and "Blazing Inferno" (d+1+2), which are its two moves that involve breathing fire, "Buffalo Horn" (d/f+1+2), which is a launching move where True Ogre thrusts its horns in an upwards motion, "Demon's Feast" (Hit by an enemy punch while going forward in a crouch), "Owl's Hunt" (3+4 while lying down), which is a move where True Ogre teleports from laying on the ground to flying in the air, followed by True Ogre flying into its opponent, "Mid Tail Spinner" (d/f+3+4), "Double Tail Spinner" (d/f+3+4,3+4), "Low Tail Spinner" (d+3+4), and "Evil Wheel" (u+3+4).

Prologue
The God of Fighting... The legend of Native Americans says the Ogre is the war weapon which creatures from outer space left on earth in ancient time. It understands entire structures of all living and artificial beings, and absorbs them.

Ending (Unofficial Synopsis)
Ogre has successfully transformed into its true form, True Ogre, and bursts through the temple. Tekken Force helicopters try to contain him only to be destroyed. True Ogre roars as the temple burns behind him.

Devil Within (Unofficial Synopsis)
True Ogre appears in Devil Within. It is referred to as simply "Ogre". True Ogre is the boss for Level 3 and Level 5. After being defeated at Level 5, True Ogre will morph into a third form, Monstrous Ogre. Apparently, despite being called True Ogre, that is not Ogre's true form. It is unknown if Devil Within is canonical or not. 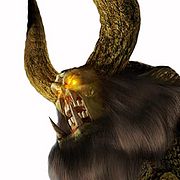 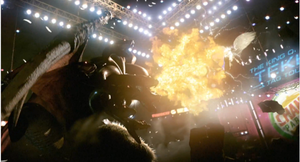 True Ogre will be featured as a playable character in Tekken Tag Tournament 2. He serves as the midboss of Stage 8 and since he has no partner, his entire health bar must be depleted. He will also regenerate health slowly. In addition to many of the moves he had in Tekken 3 and the original Tekken Tag Tournament, he now also borrows moves from more characters such as Hwoarang, Lili, Alisa, Paul, Kuma and Panda, Bob, Anna and Devil Jin. True Ogre is called Ogre in this game.

A fearsome beast that grows by sucking out the souls of powerful warriors. His left arm is adorned with razor-sharp talons, while his right arm is composed of a slithering mass of serpents[1].

From a camera's point of view, we see a destroyed city up in flames. The camera then fixes on True Ogre as the cameraman flees. True Ogre then ejects more fire from his mouth as the camera is destroyed by its flames. 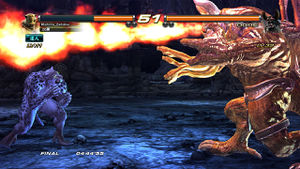 Ogre appears in the free-to-play online game Tekken Revolution, serving as the Final Boss of Arcade Battle. On higher difficulty settings, a golden version of Ogre will appear at random, which will net the player a larger reward upon defeating him. This form is far more aggressive, and is better at reading the player's moves in order to either block or counter them.