This article is about the side game. For the private corporate army, see Tekken Force.

Tekken Force is a side game in the Tekken series. It first appeared in Tekken 3, and it returned in Tekken 4. The player chooses a character and fights their way through many Tekken Force members, all named after birds, and four levels. At the end of each level, a sub-boss, which will be one of the game's playable characters, will be waiting for the player. 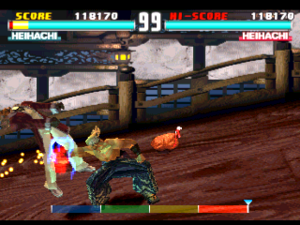 1. Stage One: Backstreets. The stage is basically a garbage filled alley-way. The boss at the end of the stage depends on the player's character.

2. Stage Two: Badlands. The stage is basically a desert area. The boss at the end of the stage depends on the player's character.

3. Stage Three: Darkness. In this stage, players move across what looks like a metal bridge in almost complete darkness. The boss at the end of the stage depends on the player's character.

4. Stage Four: Mishima Fortress. Players go through a stage similar to Hon-Maru. The boss at the end of the stage is Heihachi Mishima, no matter who the player's character is. The only exception is Mokujin. Mokujin will face Mokujin at the end of this stage.

5. Final Stage: Underground. Players get to the stage after Tekken Force is beaten 4 times. The stage is an underground area where players face Boskonovitch. After Boskonovitch is beaten, he becomes a playable character.

Tekken 4's Tekken Force mode. The fighter being used is Heihachi Mishima. The stage here is the Military Installation.

1. Stage One: Military Installation. This stage corresponds to the Laboratory stage. The boss for this stage is Combot.

2. Stage Two: Temple Ruins. This stage corresponds to the Jungle stage in Story Mode. Tekken Force members usually come out of the sky from helicopters. The boss for this stage is either Kuma or Panda.

3. Stage Three: Corridor. There is no stage that corresponds this one in Story Mode. Tekken Force members appear out of the shadows and are evasive of the player rather than coming out and attacking. The boss for this stage is Kazuya Mishima. This stage may be a reference to Devil as we can hear his BGM while going through the stage.

4. Stage Four: Mishima Fortress. This stage corresponds to the Hon-Maru stage in Story Mode. The boss for this stage is Heihachi Mishima.

A new game mode very similar in concept to Tekken Force, called Scenario Campaign, appears on the console version of Tekken 6. Unlike previous Tekken Force side games, in Scenario campaign, the player is able to have a partner, controlled either by AI or a second player, and is able to pick up weapons that can be used against the enemies.