Like Tetsujin in the Tag Tournament, Combot (コンボット Konbotto) acted as a replacement for Mokujin (gameplay-wise) in Tekken 4. Unlike Mokujin, however, Combot did not assume the fighting style of a different fighter every round. Instead, a randomly chosen fighting style lasted for an entire match. This change was not popular among fans, and Mokujin was reinstated in Tekken 5, along with his original style of random selection from Tekken 3 and Tekken Tag Tournament.

Combot returned in the game Tekken Tag Tournament 2 as a playable character in the new mode, Fight Lab. In this mode, the character follows instructions in order to better understand the complexities of the game.

Prologue (In-Game Text)
Combot is a general-purpose humanoid robot that Lee Chaolan entered in The King of Iron Fist Tournament 4 as a part of his scheme to win. Chaolan entered the tournament himself using an alias, Violet. Combot is unlike any other humanoid robots developed to date. Besides its default set of motor functions, a powerful learning AI function enables it to mimic perfectly any human motion captured on its mocap sensor arrays. With this ability, Combot is suitable for a wide spectrum of applications from childcare, housekeeping, service industries, and even military duty. However, this Combot is a unique version customized for hand-to-hand combat. In fact, its development was rushed so that it could be finished in time for The King of Iron Fist Tournament 4. Lee Chaolan’s plan was to have Combot memorize a variety of fighting styles as it progressed through the tournament. His ultimate goal was to create the most powerful hand-to-hand combat weapon in the world and win the Mishima Zaibatsu at the same time. Unfortunately, the development team did not have sufficient time to debug Combot. As a result, a few bugs remained in its memory subsystems when the Tournament started. These bugs prevent Combot from mimicking more than one person’s moves each time it is powered up.

Ending, "Combot Fin" (Unofficial Synopsis)
The words "Combot wins" are shown on the screen as the crowd yells in excitement. The fence around the arena goes down. As Combot takes in the applause and excitement from the crowd, Lee comes in and congratulates Combot. He then states that the world is his for the taking as he walks over to give Combot a hug. Combot eyes flash; he grabs Lee, and instead of hugging him, Combot spanks Lee and throws him somewhere. The crowd continues to cheer as Combot does a couple of poses before the end. 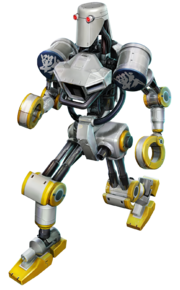 Combot is a general-purpose humanoid robot created by Violet Systems. Due to it's powerful learning AI function, Combot is suitable for a wide spectrum of applications from childcare, housekeeping, and even military duty. Violet entered Combot in The King of Iron Fist Tournament 4 to publicize their new technology, but the plan backfired when it malfunctioned on stage. After embarrassing himself in front of the public, Violet swore to take revenge with the latest model Combot, Super Combot DX, created using Violet System's full resources. [2]

A multi-purpose humanoid robot created by Violet Systems. Equipped with an advanced learning system, Combot was designed to cover a wide variety of tasks--from childcare to household chores, to military warfare. Hearing that the King of Iron Fist Tournament 4 was going to be held, Violet entered Combot in the event, hoping for a chance for good publicity. Unfortunately, Combot ended up malfunctioning during the tournament, Violet set about creating Super Combot, using all of Violet System's resources to fit his new creation with the latest and greatest in technology[1].

Ending Combot begins walking out of the arena. He wobbles around and walks through alleyways and roads. Later he finally comes across an area that destroys cars (through punching them). Later as he approaches the fence his arm falls off and the rest of Combot's body breaks apart. Lee later arrives in time to see Combot's computer shut down leaving him in despair.