His title in the original trilogy is Dinonics Commander. 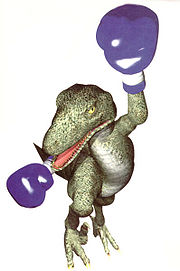 Prologue
Both Roger and Alex are the result of a military experiment. Doctor Bosconovitch wanted to combine the genes from a martial artist and cross it with a wild animal. It is rumored that Doctor Abel has stolen Roger and Alex and is keeping them with him in his secret laboratory. Alex is a hybrid of a prehistoric dinosaur and a lizard, and he is also the result of splicing Roger's genes. There have been similar species on the Earth many years ago.

Ending, "Leaping Alex"
Alex is studying a rock that appears to have a dinosaur fossil in it. A dinosaur's face flashes on the screen and Alex roars and starts running, gradually gaining speed. He runs up the mountain and, having got to see one of his ancestors, happily jumps up into the air, putting one of his fists up. 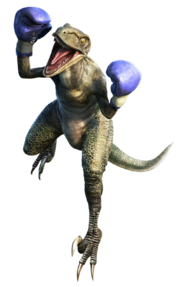 Alex's command list is based off of Roger Jr.'s fighting style. Alex, however, has his own animations and variations to his moveset.

A deinonychus trained for military purposes, Alex is a vicious animal that was created by extracting dinosaur DNA from an insect trapped in amber, with gaps in the DNA filled in with genetic data from Roger. Alex does not seem fully mature yet, but currently has about the same fighting strength as Roger. Alex will become an extremely powerful animal once he fully matures. [2]

A deinonychus trained by the military. Scientists harvested dinosaur DNA from insects trapped in amber, and spliced it with Roger's kangaroo DNA to fill, ultimately creating Alex. While he currently shares the same amount of strength as Roger, he is expected to be even more formidable in his mature form[1].

Roger Jr. is seen lost in a desert while looking for his mother. Alex spots him and tries to attack him, but is thoroughly beaten up by Roger Jr.. He later helps Roger Jr. look for his mother. Alex ends up helping Roger Jr., by putting him on top of his shoulders. They finally find Roger Jr.'s mother, and the screen focuses on Alex.