Her title in the original trilogy is Retaliating Female Ninja.

*both of the two above appearances are cameos 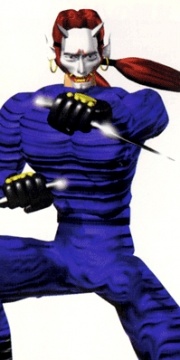 Kunimitsu wields two daggers or sickles, depending on her outfit, but is not able to attack with them. She plays almost exactly the same as Yoshimitsu, minus his unblockable sword attacks.

Prologue
Kunimitsu was a member of the Manjito crime syndicate. But when she stole for her own self-interest, she was expelled by the leader, Yoshimitsu. Even after that, she continued to steal without reforming. Her reason for entering the tournament is to plunder the treasure that Heihachi Mishima stole from the Native Americans. 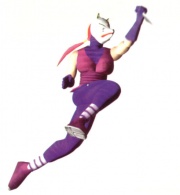 Prologue (Manual)
The sword of good fortune and light is the sword which generation after generation is succeeded in the Manji party. It is assumed the air of the partner is shut off, when (there is a rule that the leader of the next generation cuts the leader of previous generation with this sword). Kunimitsu participates in the tournament in order to take the sword.

Prologue (Extended)
Kunimitsu is known as the Devil Cat. She was a former member of the Manji clan of ninja bandits lead by Yoshimitsu. She lost her Japanese identity when she joined the group to maintain her anonymity. Upon joining, she was taught the skills of the stealth knife at the Manji ninja schools of "Jujutau". She stayed with the group for a few months until a series of petty thefts from the band's funds led to her dismissal. At a loose end, she decided to train as a mechanic mending air conditioners. She entered the first Iron Fist Tournament with the intent on stealing a Native American treasure from a young brave (Michelle Chang). Kunimitsu was easily defeated. Feeling humiliated, she sought solace with her grandfather. He was a swordsmith with a reputation. He informed Kunimitsu that the sword used by Yoshimitsu (also called Yoshimitsu) was a relic of unimaginable value. She learned that it was handed down through the Manji band, and it had the power to sever an enemy both spiritually and mentally. The sword exchanges hands when a new leader is elected. The old leader is ritually sacrificed, and the sword's power is transferred to its new owner. Her grandfather has spent his entire existence trying to forge a copy of the sword. Kunimitsu enters The King of Iron Fist Tournament 2 to face and defeat Yoshimitsu, thus claiming his sword so that her grandfather can make a copy before his death.

Ending (Unoffical Synopsis)
Kunimitsu is in a forest holding Yoshimitsu's sword. Kunimitsu looks at her face's reflection on the sword. She decides to test the sword by slicing the stone in two with it. Kunimitsu successfully does this and is shown as the sliced stone falls to the ground. 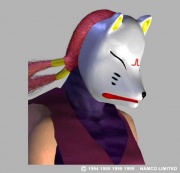 Ending (Unoffical Synopsis)
Kunimitsu and Yoshimitsu are about to fight in an area covered in snow and the area is snowing. They approach each other with their weapons. A few seconds after they attack each other, Yoshimitsu falls to the ground. Kunimitsu moves her dagger around a little bit, and then she disappears. This ending takes place in Yoshimitsu's second Tekken Tag Tournament stage, which is called "Yoshimitsu-B". 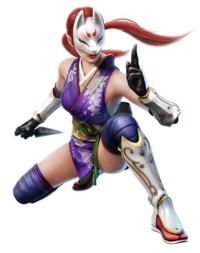 Kunimitsu features in the console version of Tekken Tag Tournament 2.

Story (Official Site) A kunoichi who hides her face behind a fox mask, Kunimitsu is a former member of the Manji Clan. She was excommunicated by Yoshimitsu after repeatedly commiting theft for personal gain. She is looking for an opportunity to steal his self-named sword, "Yoshimitsu".

A female ninja who hides her face behind fox mask, Kunimitsu was once a former member of the gang of chivalrous thieves, the Manji Clan. After stealing only for her own gain, she was cast out by the Manji Clan leader Yoshimitsu, and then disappeared. She bides her time, waiting for the opportunity to steal Yoshimitsu's sword "Yoshimitsu."[1]

Yoshimitsu is riding his horse through a forest of bamboo trees. Kunimitsu is seen scurrying after him, hidden in the trees. Kunimitsu then subdues the horse with a dart, causing Yoshimitsu to jump into the air. Kunimitsu then engages Yoshimitsu in a fight before he subdues her and holds her in place with his sword. He turns around, preparing to deliver the final blow, when he realises that his sword has been replaced by a branch. He turns around to see Kunimitsu wielding his sword as she smiles and departs. Yoshimitsu watches her leave, muttering "You've greatly improved."

Kunimitsu is featured as an unlockable character in the free-to-play online game Tekken Revolution ([5]). She was added in the August 9th, 2013 update as part of the Summer Campaign ([6]). As with the rest of the game's roster, her appearance and moveset is carried over from Tekken Tag Tournament 2.