This article is about the first Kuma. For the second, see Kuma II.

Kuma (クマ, lit. "Bear") was introduced in Tekken 1 and returned for Tekken 2. Kuma is Heihachi Mishima's pet and bodyguard. He is here to defeat his rival, Paul Phoenix. Paul was Kuma's sub-boss in both Tekken 1 and Tekken 2. However, Kuma fails to defeat him both times. Shortly after the second tournament, Kuma was presumely missing according to the trivia. His son, another Kuma, takes his place, name, and moves in Tekken 3 and all subsequent games and tournaments.

His title in the original trilogy is Rage Bear. 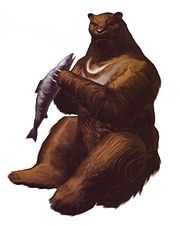 Kuma is Heihachi Mishima's pet and bodyguard. Kuma was trained in the arts of Kuma Shinken by Heihachi. Generally speaking, bears are cruel animals, and Kuma is the worst of the lot. What makes Kuma even more terrible is the fact that his favorite food is human flesh. Before fighting Heihachi Mishima, Paul Phoenix must face Kuma's overwhelming power. Be careful not to get eaten. 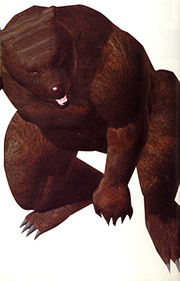 Kuma was once an abandoned pup in the forests of the Mishima estate. Heihachi Mishima found Kuma and took him in as his pet. When Kuma reached adulthood, Heihachi built him an outhouse to cater for his impressively large frame. Heihachi taught the bear simple commands and hand signals, which Kuma picked up at an alarming speed. Kuma was even taught rudimental Japanese. After two years, Heihachi realized the power contained in Kuma, and so he trained Kuma in the arts of Kuma Shinken. None of Heihachi's associates could understand why Kuma was so intelligent, which lead to a lot of them fleeing the estate in fear of the bear's intellect. This was further reinforced by Kuma's penchant for the taste of human flesh. Despite Kuma's unflinching loyalty to his master, Kuma liked to leave the side of Heihachi to sleep, even during the summer. This lazy approach means that Kuma's fighting style has never really matured and is very disjointed. This was demonstrated in the previous The King of Iron Fist Tournament, where Kuma was easily defeated by Paul Phoenix. Kuma was very impressed with Paul's fighting prowess, as he thought that the only strong human was Heihachi. Heihachi was defeated in the last tournament by Kazuya Mishima, and so the two retreated into a mountain dojo to re-train. Kuma travelled to the second tournament with his master, vowing to destroy Paul Phoenix this time. If anyone gets in his way, he will eat them.

Ending, "Paul Killer" (Unofficial Synposis)
Heihachi is aiding Kuma with his training. Kuma breaks several glass blocks with his paw. Heihachi throws another glass block into the air which Kuma breaks them with a head butt. Kuma then breaks a brick wall (with a drawing of Paul on it) with another head butt. This ending is similar to Paul's Tekken ending.