Unknown (アンノウン Announ) was introduced in Tekken Tag Tournament as the final boss. Originally intended to be the sister of Jun Kazama in early concept stages of the game, this idea was dropped and she simply became "Unknown". Her mysterious background is expanded upon in 2012's Tekken Tag Tournament 2 where she makes her return once again as the final boss. Defeating Jun in the first round of the Final Stage causes her to morph into Unknown for the second round.

Unknown appears to be an Asian woman with glowing yellow eyes and purple slime coating her otherwise naked body. In the original Tekken Tag Tournament Unknown has a Wolf Spirit accompany her in battle. It mimics every move and action she makes giving the impression that it is controlling her body. She retains the same appearance for Tekken Tag Tournament 2 though the Wolf Spirit is mysteriously absent though defeating her in this incarnation would cause multiple wolf spirits to attack her.

In the original Tekken Tag Tournament Unknown has the ability to copy all of the other characters' abilities (except Jack(s)), and the player can switch fighting styles by simply pressing down on the Right analog stick. Interestingly, she starts with the fighting style of Jun Kazama at the onset of every battle. Unknown and the Wolf Spirit aren't actually a tag team per se, as one cannot be switched out for the other. The Wolf Spirit actually possesses Unknown to "even out" this disadvantage, while playing against her, she has the ability to regenerate lost health that is still red in her health bar, a trait normally attributed only to characters who are tagged out. Furthermore, Unknown is not knocked out until even the red bits of her health bar has been fully depleted (these traits do not carry over if a player plays as her).

In fact, many fans speculated over the few clues to her identity. Unknown also appears in Ogre's Tekken Tag Tournament ending. In this ending, Ogre has defeated Jin Kazama, and he is about to consume Jin's soul. However, Unknown interrupts him, and it is implied that the two engage in a fight. Unknown is seen without the Wolf Demon. Her apparent independent and selfless intervention on the behalf of Jin furthers suspicions that she is Jin's lost mother Jun Kazama. However, another reason for Unknown to interrupt Ogre since she was originally planned to be Jun's younger sister, and that she is fighting Ogre here to try and avenge Jun, her "dead" sister. 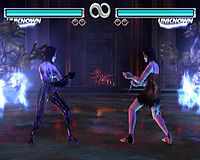 Unknown makes her return to the Tekken series in Tekken Tag Tournament 2, where she serves as the second half of the game's final boss, the other being Jun Kazama. After Jun is defeated in the first half, she will morph into Unknown for the second half. Instead of mimicking other character's, she only has Jun's moveset, but with added attacks, such as attacking using the purple slime on her stage's floor and summoning a giant hand (reminiscent of Azazel) that takes away all, but a single hit point of character in a team, and forces the character's partner to go in. On a solo character, it will take nearly half of the character's life and forces them to tag in like a wall is behind them. When she became a playable character, she still retained her new powers, however, they have received major nerfs in damage in order to allow her to be a viable character.

Nothing at all is known about this mysterious fighter[1].

Unknown is shown sinking in a murky substance, possibly the goo on the floor of Fallen Garden. Suddenly, Angel appears and stretches her hand out to Unknown, gently grabbing her hand. Unknown is then overcome with a bright glow as she continues to sink, and the purple goo covering her body then disappears, as does the Devil tattoo on her arm. She then disappears into the darkness. [1]