Marshall Law (マーシャル・ロウ Māsharu Rou) was introduced in the original Tekken, and he returned for all subsequent games, except Tekken 3 and the non-canonical Tekken Tag Tournament, where he was both replaced by his son, Forest Law, using the same fighting style.

His fighting style is Jeet Kune Do, a "style" created by Bruce Lee, the martial artist whom Marshall Law is based on.

His title in the original trilogy is The Fighting Chef.

Prologue (Manual)
The legendary dragon. He works in a Chinatown restaurant in San Francisco while dreaming of opening his own martial arts school. He is a master of martial arts. He is taking part in this tournament to open his own school with the prize money and at the same time to make himself world famous.

Ending, "The Master" (Unofficial Synopsis)
Marshall finally gets his own dojo. Students are performing somersault kicks similar while Marshall watches them. Marshall yells something at them (his words aren't heard). Marshall continues talking to them. Then, he is shown performing three somersault kicks while the others watch him. After he finishes, he puts his hands on his hips.

Prologue (Manual)
Law runs his own martial arts dojo. Unfortunately, his students were attacked and severely injured by a villain who is participating in the next tournament. Law decides to enter the tournament to avenge his students and to restore the reputation of his gym.

Ending, "Oops!" (Unofficial Synopsis)
Marshall is shown with his hands together. He looks to his left. Paul Phoenix is shown standing next to him. Marshall performs a somersault kick. When he finishes, Paul tries to perform a somersault kick, but he fails and lands on his stomach. Paul rests his head on one of his hands. Marshall shrugs. 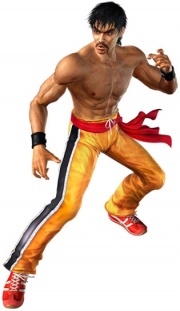 Prologue (In-Game Text)
Marshall Law was a successful businessman-- he managed a newly established dojo and even owned a nationwide Chinese fast food chain called Marshall China. Unfortunately, he lost a franchise war against a competitor and had to declare bankruptcy a year later. Unable to cope with failure, Marshall fell into depression and spent his days at home in a drunken haze. Then one day, a notice for the Tournament arrived at his doorstep. Marshall's eyes flashed with renewed vigor. After a month of intense training, he beat himself back into top physical form. "This is it," he said to himself, "It's all or nothing!" The fire within him raged hotter than ever before.

Ending (Unofficial Synopsis)
The outside of a Marshall China is shown. Marshall walks through the Marshall China and watches his customers. A punk customer says, "Man, the food here sucks!" Another punk, who is at the same table, says, "We hafta pay for this?" Marshall hears them and walks over to them. Marshall asks, "What did you just say?" The first punk replies, "You heard me, I said this food sucks! You expect us to eat this stuff?!" Marshall asks, "What do you mean it sucks?!" The man answers, "This pepper beef is too damn spicy!!" Marshall uppercuts the punk into the air. Then, Marshall tries some of the Marshall China food. He says, "What are you talking about? This is good!" The other punk (the one that said, "We hafta pay for this?") smashes a glass bottle on Marshall's head. Angered, Marshall says, "...You!" Marshall kicks the punk who falls to the ground. Marshall starts fighting with some of the other punk. He knocks one wearing a black shirt onto an African-American wearing a red shirt. A newspaper with "The New York Flash" has "Marshall China Goes Out of Business" as a headline. Other things that can be read on the newspaper are, "Marshall China Loses in Court" and "The Factor of a Lost Case." A black and white photo of someone holding Marshall back is also on the newspaper. Next, some students in red shirts are seen throwing punches and grunting. Marshall is shown, and he says, "No, no, no. Put more anger into it!" Marshall shouts loud and throws an uppercut as an example of what he wants the other men to do. The men start throwing faster punches, and they start grunting louder. The outside of the building, Marshall Dojo, is shown as Marshall says, "Yeah! That's more like it! Lower your stance a bit more, and..." The ending video ends. 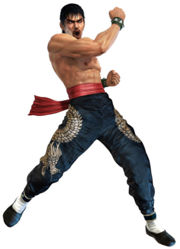 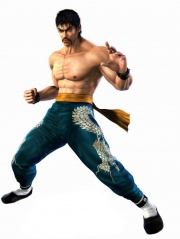 Prologue (In-Game Text)
Marshall Law, a Martial Arts Cook. Marshall entered the King of Iron Fist Tournament 4 to get back on his feet again, however, his restaurant failed and he also failed to win the tournament. Marshall did not have enough money to return to America and stayed in Japan as a dishwasher, a month later he had a call from his wife. His son Forest was riding on Paul Phoenix's bike and caused an awful accident. With his son' accident and the money he needs to head home, Marshall decides to win and enter the King of Iron Fist Tournament 5.

Interludes (Unofficial Synopsis)
Stage 4 Paul Phoenix: Marshall asks Paul to throw the fight, but Paul refuses. If the player loses, Marshall gasps for money but Paul offers him the money. If the player wins, Paul gasps to be number 1 but Marshall offers him dim sum after he wins the tournament.
Final Stage Jinpachi Mishima: Jinpachi says "Die." Marshall asks if he is "Mishima," and Jinpachi answers yes. He then asks if he'll get the prize money if he beats him, also getting a yes. Marshall then gets ready to fight.

Epilogue (In-Game Text)
Marshall returns to America after his success at the tournament. He meets with a lawyer to discuss how to repay his debt.

Ending, "Bike Problem" (Unofficial Synopsis)
The outside of a building is shown. Marshall walks out of it, lowers his head, sighs, and says, "Broke again." Someone on a bicycle is approaching Marshall. Marshall goes into a fighting stance. The person on the bicycle is revealed to be Paul Phoenix. Paul appears to be having difficulty pedaling. When Paul reaches Marshall, the bicycle falls apart, and Paul falls to the ground. Paul hands a stack of papers to Marshall and says, "Here..." Marshall looks at the paper on the top of the stack and opens his mouth wide in shock. It is a bill for $34,500.00 from BikeShop XYZ. Apparently, this is a bill for Paul's motorcycle. Paul signed "Marshall Law" on the bill. Paul begs Marshall to pay his debt. (He says, "Come on, man. Pay the bill already.") Marshall nervously groans for a few seconds. Then, the screen changes to make it appear as if the two are about to fight (there are health bars and a timer above them, they are in their fighting stances, and an announcer says, "Round 1. Fight!"). Marshall performs an uppercut that knocks Paul into the air and completely depletes Paul's health bar. Paul falls to the ground, landing on his back. Marshall runs away, dropping the papers as the ending video ends. 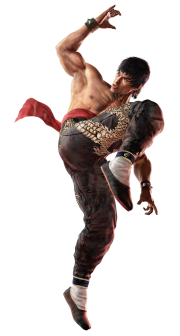 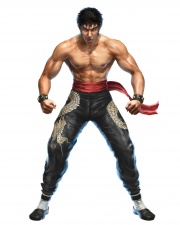 Prologue (In-Game Text)
During the middle of the King of Iron Fist Tournament 5, it was discovered that Marshall Law was working illegally in Japan, and, as a result, he was immediately deported to his home country of the United States of America. With the deadline to pay for the damages of his son’s accident fast approaching, hopes of getting the money needed were slim. Just then, his best friend Paul Phoenix approached him with the idea of forming a team—securing a high-ranking prize alone would certainly be difficult, but if he was part of a team, the probability of winning would be much higher. Marshall accepted Paul’s invite, but thinking a three-man team was better than a two-man team, the renowned boxer Steve Fox caught his attention.

Ending, "Strong Laxative" (Unofficial Synopsis)
In a distant house, Marshall was seen celebrating with Paul Phoenix and Steve Fox over their win in the tournament, which is obvious due to the many large money cases in the background. Unfortunately for both Paul and Steve, Marshall was holding a small bottle that had "Strong Laxatives" labeled on the front. With super-swift hands, he puts the laxatives onto a whole pizza. "It's ready, My special recipe pizza!". Marshall places the pizza onto the table "It's about time!" Paul says as he takes a slice. "It looks delicious." Steve complimented. Paul and Steve eat the pizza, and they sat there telling Marshall how good it was, Until their faces turned pale blue. Steve and Paul stood up grasping their abdomens, and rushed to the bathroom. Unfortunately for Paul, Steve arrived first, leaving Paul shouting at him and holding it in.

Unnoticed, Marshall sneaks out of the house, carrying all the money cases on his back, saying "Sorry, guys. See ya!" as he leaves. 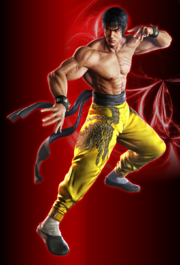 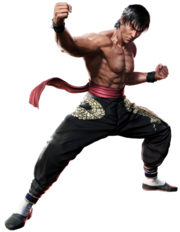 Law will be featured as a playable character in Tekken Tag Tournament 2.

Marshall Law was previously known as the "Legendary Dragon" and now holds the title of "Fighting Chef." After his Chinese restaurant on the first floor of his dojo gained popularity, he opened a nationwide chain, only to file for bankruptcy a year later. When his son, Forest, got into a motorcycle accident, the medical bills and compensation forced him into debt, alongside Paul Phoenix[1].

Marshall is now seen practicing his nunchakus in front of Forest, amazing his son. Forest volunteers to have a go with the weapon but ends up accidentally tossing it out of the window. As if that wasn't enough, the nunchakus startle a driver on the road and, in a series of events, causes a major accident below 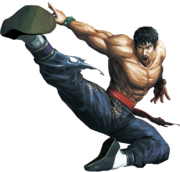 Marshall Law has been confirmed as a playable character in the crossover game Street Fighter X Tekken. His official tag partner is Paul Phoenix ([1]).

Down and out, and lacking funds, Paul and Law watched a street broadcast about the mysterious box that crashed in the Antarctic.

Paul: Hey Law, take a look at that box…

Smelling big bucks, the pair makes hasty preparations to head to the Antarctic by boat. They believed if they were to go get their hands on that box, there would be companies lining up for the chance to bid on the contents. They’d be able to finally rid themselves of their bad luck! With that in mind, the two secretly board a ship bound for the Antarctic.

Paul: Once I get my hands on that box, I’ll be the richest guy in the universe!

Law (in the back) alongside the other seven starting characters. 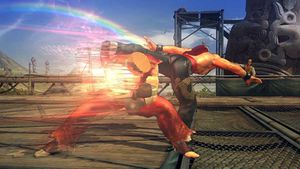 Law facing off against Paul.

Law is featured in the free-to-play online game Tekken Revolution as one of the starting eight characters. As with the rest of the cast, his appearance and moveset are carried over directly from Tekken Tag Tournament 2.

Marshall Law appears in the Tekken Movie played by Cung Le. From what is known he was the people's choice in the previous tournament and it is known in that tournament he knocked Paul out in 28 seconds. In the movie, he was defeated by Jin.