Josie Rizal (ja. ジョシー・リサール Jyoshi Risāru) is a character first introduced in Tekken 7 as part of the first set of time release characters. Prior to her official announcement, her render was leaked, and there were many speculations as to her origin. Many pointed to the Philippines due to the design and color scheming. Before her render was leaked, Harada had made a tweet considering a Filipino character for the game, exclaiming "Jollibee" in the process. According to Harada, her constant crying is due to her previous backstory. Mad Catz's Markman was also consulted heavily in order to create her design.

Her character design was drawn by Mari Shimazaki. 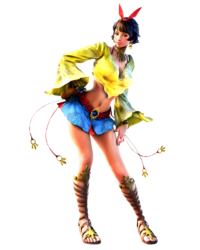 Josie was revealed alongside Jin and Devil Jin as part of the first set of time release characters. Prior to official announcement, her render was leaked.

She has multiple moves and animations that were originally seen from Bruce Irvin. Whether the two are connected by story or if this was a mere coincidence is unknown.

Josie Rizal tried her best to support her family by balancing two jobs. One as a model, and one as a professional kickboxer. One day, while she was out running on her usual training course along the mountain roads, she was suddenly confronted by an enormous, hairy creature!

Josie screamed, and then fled half in tears, but the creature remained hot on her heels. Realizing she had little chance of escape, Josie abruptly came to a halt, then turned trembling, to face her feral foe...

Josie successfully defeats Kuma, crying that Kuma scared her. However, Kuma's paw reveals that Josie had lost one of her earrings and that he was trying to return it to her. Shortly after returning it, he falls unconscious.