Mokujin Monster is a monster consisting of more than a thousand ordinary Mokujins, controlled by Heihachi Mishima who is inside it. 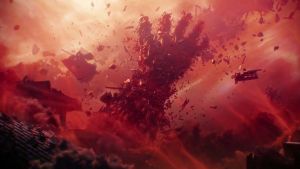 The Mokujin Monster in hand form, at the beginning of his transformation, in Tekken: Blood Vengeance.

After battle of Devil Jin and Devil Kazuya, Heihachi then unleashes the ancient spirits of the Mokujins, but is defeated by a final burst of attack by Alisa. Jin then leaves, telling Xiaoyu that he awaits a future challenge.