His title in the original trilogy is Lost Memory Monster. 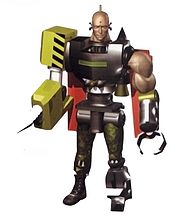 The prototype for Jack, developed by Russia. Since it was just a step in the production, the skin was removed from the mecha. Prototype Jack (or P. Jack, for short) was built only for power, so his power capacity far surpasses that of the completed Jack. The tournament's sponsor, Heihachi Mishima, has entered P. Jack into the contest in order to face him against Jack. 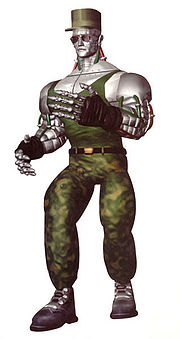 After the first Rave War, the remains of the first Prototype Jack unit (a first-stage model of the final Jack model) were almost destroyed by Jack's rampaging combat abilities. Upon reactivation, P. Jack complained that his alter-ego had received a refit, and he repeated his plea until his fuel ran out. Now resting in Kazuya Mishima's laboratory, P. Jack was left untouched for months before a back-up fuel supply reactivated him, and once again he began his constant pleas for a new look. To quieten him, Kazuya gave his captured scientist (Doctor Bosconovitch) the task of remodeling the robot. With a cunning memory change, the doctor managed to convince P. Jack that his new body afforded him superior protection to Jack's, despite it being only a hat and sunglasses. Kazuya is currently goading P. Jack to demand more programmed maneuvers in time for The King of Iron Fist Tournament 2. Having repeated his fighting moves over and over (to such an extent that the doctor disconnected P. Jack's voice box), P. Jack now feels his next encounter with Jack will have a much different conclusion.

Ending, "Screw Loose" (Unofficial Synopsis)
Prototype Jack comes out of the shadows and flies straight up into the sky. Unknown to Prototype Jack, three screws have fallen out as he flies away. 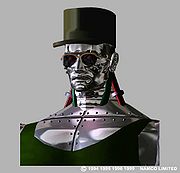 Ending (Unofficial Synopsis)
Prototype Jack and Gun Jack stare at each other while standing close to each other. Both bow their heads. They turn around slightly, put their hands in the air, and then they fly straight up into the air. This ending takes place in Paul Phoenix's Tekken Tag Tournament stage. 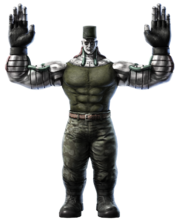 After a long absence from the series, Prototype Jack returns in Tekken Tag Tournament 2, a non-canonical Tekken game [1].

Prototype Jack's moveset has been updated to include many of the moves used by Jack-6, and while the game strategy for the two is very similar, Prototype Jack comes with his own unique variations to a decent selection of his arsenal. For example, his "Megaton Cyclone" (b,d/b,d/d/f+1,1) move is a two-hit version of Jack-6's "Debugger", and whereas holding down on D/B+2 with Jack-6 will simply result in an extension of its arm, upon connecting, Prototype Jack will instead grab hold of the opponent's ankle and toss them away. A good deal of his moves have varying animations, as well, such as "Patriot Fist" (u+1+2) and "Body Smash Hammer" (d/f+1+3,1+2), most of them incorporating his rotatable hands, arms and torso. This trait also comes into play on moves that can inflict more damage by holding the button down (ex. B+2). All of the new moves he received in the original Tekken Tag Tournament are still intact, and he even retains the "P. Jack Hammer" (1,1,1) string that the other Jacks lost from Tekken 5 and onward, with the changes of having the first hit now be a straight jab instead of an arm swing towards the right, and the addition of a mix-up option with "Fragmentation Spin Punch" (1,1,2). His d+1,2 move, shared with Paul Phoenix, also remains, albeit animated much differently. While all of Prototype Jack's standard throws are different from Jack-6, the two share the same back throws (the 1+3 "Spinal Crush" and the 2+4 "Throw Away", though the latter's animation is not the same), replacing his old "Reverse Lift Up Slam" from previous games.

A prototype version of Jack developed in Russia. After learning of Jack's upgrades, P-Jack requested an upgrade from Dr. Bosconovitch, as well. Dr. Bosconovitch complied by adding a rotation function to P-Jack's limbs, as well as flight capabilities. P-Jack loves sunglasses, and they have become his trademark. [2]

The first incarnation of the JACK series, developed by Russian engineers. Hoping to be upgraded along with his fellow JACK units, P. Jack had Dr. Bosconovitch add rotating arms and torso, as well as flight capabilities, to his frame. He's never seen without his favorite sunglasses which have become his trademark[1].

P-Jack is seen entering supervising the creation of a giant model of himself. After the head is attached he goes into the machine and instructs the other P-Jacks to leave as he prepares to fly. Later as the model is flying a P-Jack appears holding a giant screw that was meant to be added in the giant model. Later the flying model explodes in mid-air.

Prototype Jacks in the Motion Picture

Three Prototype Jack robots are programmed to protect the labs in which Lee Chaolan and Heihachi Mishima had their test subjects hidden. There comes a point in time where the three Prototype Jacks and Jack-2, along with Lei Wulong, have a battle in the middle of the lab.