Prototype Jack was originally a modified version of the first Jack robot. In Tekken 2, he received an upgraded appearance, making it easier to tell him from Jack 2. He has kept his Tekken 2 appearance ever since.

Prototype Jack's Player 1 outfit is the same is his rival and it consists of green pants, human-like skin on his face (but his body is metallic), rockets on his back, a visible robotic left leg, and a large yellow drill for a right arm.

His Player 2 outfit consists of some white cyborg pants below his torso with two red lines on each shin, some small black boots, a visor similar to that of Geordi La Forge in 'Star Trek: The Next Generation', and a spinning mace in place of the yellow drill on his Player 1.

In Prototype Jack's Player 1 outfit, his human-like skin is removed, so he remains with a metallic look. His robotic left left is covered up like his other and he wears black army boots over them. Also, he sports sunglasses and fingerless gloves. A 'normal' right arm in place of the drill, however the drill motion is still carried out into the right hand.

His Player 2 outfit is a simple color edit of his Player 1 making his hat, tank top, gloves, and pants from green to blue. The reflection on the metal parts is also blue.

Prototype Jack's Player 2 outfit is similar to his Tekken 2 Player 2, except his clothing changes from blue to light brown. His hat is reversed and he wears no tank top. 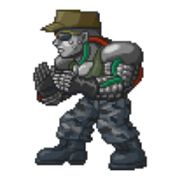 Player 2 Outfit: P. Jack's tank top is white instead of green, and his Pants and hat are brown.