From Tekkenpedia
(Redirected from Jack 2)
Jump to: navigation, search

Jack-2 is an upgrade of Jack, who appeared in Tekken. Jack-2 makes his only canonical appearance in Tekken 2. He is also in Tekken Tag Tournament, but this game is non-canonical. Jack-2, like Jack, is rivals with Prototype Jack. He is destroyed by Doctor Abel, which is shown in Jack-2's Tekken 2 ending. Jack-2 is replaced by Gun Jack in Tekken 3.

His title in the original trilogy is Super Killing Machine.

An android working for the military, Jack-2 is an improvement over the old Jack from the previous tournament. With a new computer chip, he has the ability to learn from his mistakes. Jack wants to save his creator from Kazuya so that he can become more human.

Ending Unofficial Synopsis
Jack-2 and a young Jane are playing on a tropical island. A satellite way up in space fires a laser at Jack-2, shutting him down. 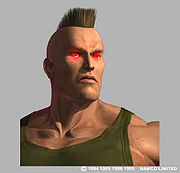 Jack-2 had mysteriously come across a little girl named Jane, who appears to be very ill. He is in search of a cure for her illness as he gets caught up in the Tekken tournament. He must save the little girl and survive the Tekken tournament before it's too late. Jack-2 and Jane want to get on the ship but Lee Chaolan won't allow them on, so he makes a deal. Lee will ask Bruce Irvin to fight Jack-2. If Jack-2 wins, he can proceed to the ship.

So Jack-2 defeats Bruce and they proceed. When Lei Wulong was going to be killed, Jack-2 stepped in and killed his captor. Lei doesn't understand why he had to killed. Jack-2 killed him. He said that it was payment for helping him and Jane get on the ship. Soon Lei, Jane and Jack-2 head to Mishima Industries where they will meet Doctor Bosconovitch. In the middle of the lab, Jack-2 meets three Prototype Jack robots. He destroys all of them and proceeds to meet the doctor. Soon when Lee Chaolan pressed the detonation button for blowing up the entire island, Jack-2, Doctor Bosconovitch, Lei and Jane had to escape. Lei, Jane and Doctor Bosconovitch escaped from the closing door and survived, but Jack-2 however his torso was being crushed by the door thus sacrificing himself for Jane and the rest of them. Doctor Bosconovitch and Lei promise to look after the girl. Lei thanks Jack-2. Jack-2's last lines are "Farewell. I promise when I come back, I'll be more human... for you".