Panda was introduced in Tekken 3, and she returned for all subsequent games. Panda is the pet of Ling Xiaoyu. Kuma is in love with her, but Panda isn't interested in him romantically.

Panda has been featured as a "costume swap" for Kuma in all of the games that she has been in. They have the same moves, stance, and animations (shown before a fight and after a fight), but their endings are always, in some way, different.

Her title in the original trilogy is Raging Bear.

Prologue (Manual)
Protector of Xiaoyu. She is cared for at Ling Xiaoyu's high school. To participate in the tournament, Ling moved to the Mishima Industrial College in Japan. Heihachi taught Panda advanced bear fighting so that she could act as a bodyguard for Xiaoyu during the tournament. Although Kuma is fond of Panda, she dislikes him and keeps her distance.

'Ending, "Honey" (Unofficial Synopsis)
Kuma is waiting outside of the gate of Mishima Polytechnical School. Ling Xiaoyu and Panda are leaving the building. As they walk out of the gate, Kuma offers Panda a bouquet of flowers; Panda, however, has not noticed and continues to walk past him with Xiaoyu. Kuma continues to stand there, even until the end of the scene.

Prologue (In-Game Text)
After the last Tournament, Panda accompanied Xiaoyu back to Mishima High School. Since then, Panda spent her days training with Xiaoyu. On some days, she wondered (just a little) about the whereabouts of Kuma, who disappeared after the Tournament. One day, two years after the Tournament, Xiaoyu, lost in her thoughts, told Panda about the announcement for The King of Iron Fist Tournament 4. After hearing Xiaoyu's concerns about the Tournament and the Mishima Zaibatsu, Panda made up her mind to become Xiaoyu's bodyguard once again.

Epilogue (In-Game Text)
After winning the Tournament, Panda handed over the entire estate to Xiaoyu. Xiaoyu made public the wrongdoings of Mishima Zaibatsu and used the fortune to compensate its victims.

Ending (Unofficial Synopsis)
The scene opens with the words: "Then Panda invited Xiao out..." Panda and Xiaoyu are sitting at the Arena. Xiao asks why Panda asked her out. Panda takes out a picture of her, Xiaoyu and Jin, and then points at Jin. Xiaoyu then believes that Panda wants to help her find Jin; Panda, however, wants Xiaoyu to do it on her own, since she would be on the "endangered species" list. Upset, Xiaoyu places her face on her knees. A moment later, Xiaoyu stands up and, with a new resolve, decides that she will go on her own. She hugs Panda and says that they will always be best friends. The camera shifts the the building high up above the Arena as Xiaoyu says "Thank you (arigato)."

Prologue (In-Game Text)
Panda, pet and bodyguard of Ling. After the conclusion of the King of Iron Fist Tournament 4, Ling Xiaoyu had been feeling down. Panda, worried about Ling, was searching for a way to cheer Ling up decided the best approach would be to find Jin Kazama. Panda tried various methods but was unable to find Jin. One day, Ling burst into the room excited. "Panda, I've decided to enter the King of Iron Fist Tournament 5 and I need your help once again". Panda didn't quite understand Ling's reason for entering the tournament but decided to help if it would make her happy.

Interludes (Unofficial Synopsis)
Stage 4, Kuma: Kuma walks over to Panda and offers her flowers. Panda declines the offer, saying that she's too old for him and doesn't feel the same way. Kuma then tells her that if she won't be his wife, then she would have to accept "this." After being defeated, Kuma begs Panda to save the Zaibatsu. Panda then tells Kuma to stop by the Master's Office if she wins the Tournament.
Final Stage, Jinpachi Mishima: Panda walks through Final Stage 2. Jinpachi (in human form) walks up behind her and says, "I'm impressed that you've made it this far. I am Jinpachi Mishima. My goal... My goal is to destroy all existence!" Shortly after Jinpachi starts to speak, Panda turns around and notices him. After he finishes speaking, Jinpachi transforms into his "Devil" form.

Ending (Unofficial Synopsis)
Panda is reading something on a piece of paper. After Panda reads it, she places her paw print on it. Suddenly, Lee Chaolan runs up to Panda, saying that Kuma wishes to see her. He asks her how she would like to proceed. Panda replies, "Bring him here". Lee lets Kuma enter the room. Kuma walks into the room and says "My lovely honey!". Panda replies, "My feelings for you finally got through to you!". A few seconds later, a closeup of one of Panda's eyes is shown. Panda presses a circular red button, and a trapdoor is opened underneath Kuma. Kuma falls down into the hole. The trapdoor closes, and Lee gives Panda a "thumbs-up" gesture with one of his hands. A few seconds later, Ling Xiaoyu walks into the room. Xiaoyu greets Panda and asks how she's been. Then, she asks, "What does this button do?" (referring to the triangular blue button right next to the circular red button). A drop of sweat can then be seen on one side of Panda's head. Xiaoyu says, "We'll find out", and she presses the triangular blue button. Panda falls down a trapdoor that is underneath her chair. Then, the trapdoor closes. Xiaoyu says, "Panda?..." Lee gives her a "thumbs-up" gesture with one of his hands.

Prologue (In-Game Text)
Panda took part in The King of Iron Fist Tournament 5 in the form of Xiaoyu's bodyguard. Panda was relieved to learn Heihachi Mishima still lived, but only briefly--her moment of relief past by quickly without notice with the sudden announcement of The King of Iron Fist Tournament 6. Bound by duty, Panda finds herself once again propelled into harm's way.

Ending (Unofficial Synopsis)
Asuka yells at Lili, "Are you some sort of idiot?!" Then the two of them exchange powerful blows at each other. Meanwhile, Xiaoyu and Panda come rushing from the side, as the girl exclaims that she's going to be late. Panda runs faster and knocks away Asuka, Lili, and the limousine, who were all in the way. The two girls get back up and chase after Panda and Xiaoyu angrily.

Panda, Ling Xiaoyu's pet and personal bodyguard, was concerned because she hadn't seen Xiaoyu since she'd left in search of Jin Kazama. Panda deduced that Xiaoyu was likely at a King of Iron Fist Tournament match, so she headed off to the arena.

Panda approached the staff entrance and inquired with the guards as to Xiaoyu's whereabouts, but was hurriedly ushered inside. Believing Xiaoyu to be somewhere up ahead, she bounds down a darkened corridor towards the light ahead...

But to her chagrin, it wasn't Panda's dearest Xiaoyu who awaited her, but an unfamiliar, boorish man with a bizarre hairstyle. Enraged by the man's attitude and absence of her owner, Panda's fury reaches boiling point!

Raising her paws in victory against Paul, one of Panda's bracelets fall off, causing her to remember that Xiaoyu was still missing. Catching a small whiff of her scent, Panda immediately charges out of the arena to resume her search. 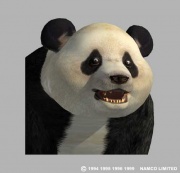 Ending (Unofficial Synopsis)
Kuma offers Panda flowers. Paul Phoenix can also be seen behind Kuma. Panda slaps Kuma and walks over to Ling Xiaoyu. This ending appears to take place at the "School" stages ("School-A" and "School-B"). It is interesting to note that at one point, the sky is blue (like in the "School-B" stage), and at another point, it appears to be getting close to sunset (like in the "School-A" stage). 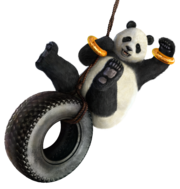 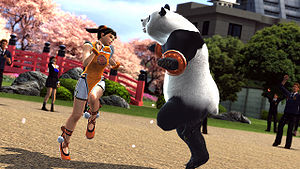 The team of Panda and Xiaoyu.

Panda will be featured as a playable character in Tekken Tag Tournament 2.

Panda accompanied Xiaoyu to Japan as her pet. In order to fulfill her duty as Xiaoyu's bodyguard, she's been trained in Heihachi-Style Advanced Kuma Shin Ken by Heihachi Mishima himself. Heihachi's pet Kuma is smitten with her, but she has no interest in him[1].

Panda is seen riding a roller coaster beside Alisa with both Xiaoyu and Miharu sitting in front of them. As the coaster continues to ascend, Alisa asks Panda if anything is wrong. Before Panda can completely answer the question, the coaster begins descending from the peak. Later, the four are seen at the teacup rides. Panda attempts to ride with Xiaoyu first, only to be pushed out of the way by Miharu, leaving Panda with no choice but to sit with Alisa instead. Frustrated, Panda raises her arm and growls right before the ride begins, as Alisa once again asks if anything is wrong. Fatigued and dizzy from the ride, Panda momentarily stops to recover and thinks about spending time dancing alone with Xiaoyu, only for Xiaoyu's face to suddenly be replaced with Miharu's. Snapping back to reality, Panda is offered some water by Miharu, but the bear immediately scoffs the offers. Later Xiaoyu and Alisa arrive, and Panda takes the opportunity to jump on Xiaoyu, and Alisa proceeds to explain that Panda may be jealous of Miharu. Xiaoyu later believes that she was neglecting Panda as she had not seen Miharu for some time, and apologizes to Panda. The scene ends with Alisa deciding that all four of them enter a sauna together, with Miharu curious of how Panda would act in a sauna. 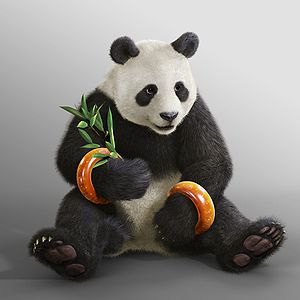 Panda will be featured in the new Tekken movie called Tekken: Blood Vengeance.