Raven (レイヴン Reivun) was introduced in Tekken 5, and he returned to Tekken 6.

Raven's ninjutsu fighting style is highlighted with his teleportation moves and extremely quick maneuvers. He is highly similar to Kunimitsu, a female character who has not made a canonical appearance since Tekken 2. They do not have similar moves, but their techniques are similar (previously described).

To date, despite not being of Japanese origin, Raven is actually the most traditional (and some would say even lightly accurate) ninja in the Tekken series. His fighting style, a combination of grappling, takedowns, and heavy strikes has light inspirations from supposedly real hand to hand combat ideologies practiced by the ninja. By no means perfectly accurate, it is, however, more accurate than the typical multi-hitting speed demon style often used by ninjas in video games, as real ninja often opted for quick take downs and grapples to incapacitate. Many of Raven's other qualities are much more traditionally ninja (as depicted in fiction at least) like than that of Yoshimitsu, such as his tendency to leave a scene by jumping into the air, his hand symbols, and his poses. Raven's second player outfit is very traditional ninja attire complete with a flowing scarf, light armor, hood, and a cowl.

On a humorous note, when Yoshimitsu fights Raven in Story Mode, Raven cannot believe that Yoshimitsu is a ninja, as his fighting style and colorful, as well as deceptively clumsy, style is supremely unlike that of a ninja (it can be argued too that Yoshimitsu is quite far away from the archetypes of a ninja despite being one by profession). Raven, in a rare showing of personal agenda, eagerly takes on Yoshimitsu to show him true ninja fighting. If Yoshimitsu loses, Raven will attempt to teach Yoshimitsu how to perform the kuji-in (a long time Ninja trait in fiction) with humorous results as Yoshimitsu has difficulty doing it. This is a lighthearted moment for the rather stoic Raven.

Raven bears some similarities to Wesley Snipes. He takes characteristics from some of the characters he has played in films (Simon Phoenix's hair, Blade's style and similar clothing, etc.). However, when asked if the similarities were intentional, Namco stated that it was purely coincidental. Raven has enjoyed a warm reception for his unique fighting style. He is considered a low tier character, as Raven has to take unneeded risks to do decent damage to an opponent.

Whatever costume Raven wears (with the exception of his extra costume ([1]) / ([2])), he always has two kunai strapped to his waist. Curiously, he never uses them in any of his moves despite his rather cinematic use of them during Tekken 5's intro movie making short work of a Jack-4 unit. Another rather interesting thing to note is that the name "Raven", obviously lifted from the bird itself, is a reference to the Japanese demon Tengu. Sometimes, ravens in general, are called Tengu, as well. What makes this interesting is that in Japanese mythology, as well as history, ninjas were sometimes called Tengu due to their dark outfits and covert ways. Some Japanese myths incorporating anthropomorphic animals, such as Tanuki and Kitsune, often depicted Tengu (anthropomorphic Ravens along similar lines to Tanuki) as ninjas. This is, in fact, one of the most ancient archetypes of the Ninja.

Raven is a stoic man, with a quick intellect and unbreakable sense of professionalism. He takes pride in his job and status as a Ninja. Although the nature of his company is ambiguous, his actions imply it works towards the greater good. He finds it difficult to believe in the more supernatural elements of his missions, but when faced with them, he takes it into his stride and doesn't lose face. His seriousness is a constant trait of this character, only broken if Yoshimitsu loses to him in his story stage. Baffled by Yoshimitsu's bizarre attire and clumsy ways, he attempts to teach Yoshimitsu the kuji-in, and grows uncharacteristically frustrated when the other fighter fails to so. His rivalry with Sergei Dragunov seems to go deeper than mere professional interaction. If one faces Sergei Dragunov in Scenario Campaign (in a rare show of speech) the other agent threatens to carve more scars into his face. This could imply that Dragunov was the one to scar him. Interestingly, one of the only times Dragunov speaks openly is to his rival, Raven. An obvious history exists between them. 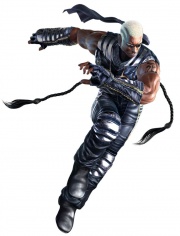 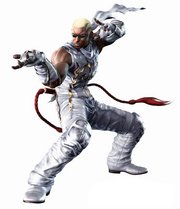 Like several other characters, Raven has his own 'special' move. It is called "Summon Mirage" and allows him to split in half, but also takes 5% of his energy. [3]. Like Yoshimitsu, he has the ability to teleport.

Prologue (In-Game Text)
Codenamed 'Raven', he is known as one of the most skilled and ruthless agents from a certain government intelligence agency to which he belongs. Other than the x-shaped scar on his face, little is known about him. While on a mission to investigate connections between Mishima Zaibatsu and G Corporation, he witnesses Heihachi Mishima being assaulted by a deployment of Jacks and the explosion that ensues when the Jacks self-destruct. Afterwards, news reaches Raven that The King Of Iron Fist Tournament 5 will be held. Raven decides to enter in order to gather intel about the tournament and the motives of those behind it.

Interludes (Unofficial Synopsis)
Stage 8, Heihachi Mishima: Raven is shocked at Heihachi being at the tournament. Heihachi explains his survival. Raven calls his superiors who give him orders to defeat Heihachi which he does. Raven has Heihachi by the throat and he is ordered to eliminate a new target who is Jinpachi and release Heihachi.
Final Stage, Jinpachi Mishima: Raven confronts Jinpachi and is ordered to kill him. After winning, Raven is told that he is Heihachi's father and the founder of Mishima Zaibatsu along with facts about the explosion setting him free. Jinpachi congratulates Raven on doing well.

Ending, "Title" (Unofficial Synopsis)
Raven defeats Jinpachi Mishima, and Jinpachi dissolves into dust while Raven watches. After Jinpachi dissolves into dust, Raven presses a device in his ear and says, "Mission complete. Returning to HQ." Then, Raven starts running, jumping up the elevated parts of the area while doing this. Finally, Raven performs a forward flip and goes out of sight. After a few seconds, Raven is shown on an aeroplan, crouching to keep his balance. After crouching for a little while, Raven stands up and crosses his arms while the aeroplane flies away. 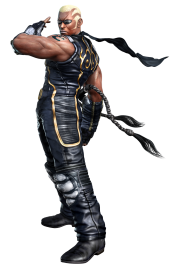 Raven infiltrated The King of Iron Fist Tournament 5, found Heihachi, who had been thought to be dead, and fought with him. Before either side could win, Raven was ordered back to headquarters and forced to retreat. As the world was caught up in disorder due to the work of the Mishima Zaibatsu, and the Zaibatsu's quarrel with the G Corporation gradually heated up, it became only a matter of time before a large-scale encounter. Raven once again infiltrated The King of Iron Fist Tournament 6 in order to stop such an encounter before it occurred.
Ending (Unofficial Synopsis)
The Russian military have Azazel captured and Dragunov signals them to haul it in. Suddenly, a plane appears and Raven is on it. He performs the Kuji-in and then jumps down, throwing shuriken at the soldiers. He then lands on Azazel and extracts a magenta-colored orb from it. Dragunov attempts to shoot him in the head but Raven leaves behind an illusion and escapes on the plane with the soldiers shooting at it.

Scenario Campaign (Unofficial Synopsis)
Raven protects Lars during the Scenario Campaign mode and watches his back (as seen when he saves him from NANCY-MI847J). After Jin Kazama forces Alisa to turn on Lars, Raven becomes Lars' new partner and assists him throughout the final two sections of the game. After defeating Azazel and Jin, Raven and Lars part ways, as he gives Lars the emblem that Tougou wanted him to have. He leaves by saying that the next time they meet, they might be enemies. After the credits, a cutscene shows Raven and men from the organization he works for driving out to the remains of Azazel's Temple. They find Jin lying face down, half-buried in sand. Raven's final line is, "Why can't I be wrong just once?" 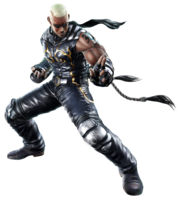 Raven will be featured as a playable character in Tekken Tag Tournament 2.

Part of an international secret service, the agent codenamed "Raven" is the most skilled and ruthless man on the field. Besides the x-shaped scar across his face, little else about him is known. It's believed that his organization dictates his duty to maintain the world's balance of power. The strife between the Mishima Zaibatsu and G Corporation grows more violent as the years pass, and it is only a matter of time before it blows into a full-scale war. In an attempt to stop this war before it happens, he has begun to infiltrate the Mishima Zaibatsu[1].

Raven waits in a bamboo forest, and soon Yoshimitsu, on horse back, arrives. The two begin to duel with each other with their respective weapons. Neither gain the upper hand, and later Yoshimitsu decides to fly up and slash Raven from there, but Raven realizes he was just attacking a clone. The real Yoshimitsu slices branches to attack Raven, but it turns out that it wasn't actually the real Raven. Raven then takes the opportunity to slash Yoshimitsu thrice on the back, defeating him. He then says "I'm finished here" 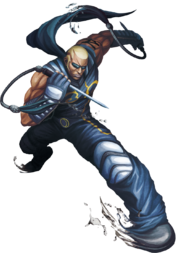 Raven will be featured as a playable character in Street Fighter X Tekken, an upcoming crossover game between the Tekken and Street Fighter franchises.

Dispatched by an unknown corporation, the agent known as :Raven tracks his targets from the darkness and erases them. He uses a unknown derivation of classic ninjitsu. Regardless of his mission's difficulty, Raven can always be relied on to carry out his duty. He does not recognize Yoshimitsu as a true ninja such as himself. Due to a request the two travel to Antarctica, but only under the condition that things are done Raven's way.

As the leader of the "Robin Hood" style ninja group known as the Manji Clan, Yoshimitsu hears a strange ringing sound throughout the night, as if it was calling for something. Yoshimitsu wonders if his demonic sword is resonating with from the people now in the Antarctic who are in pursuit of Pandora. He sets out for the frozen continent in order to appease the appetite of his cursed sword

Yoshimitsu: (I fear for what is about to happen. To do this alone, I cannot.)

Yoshimitsu hires the services of Raven to watch over him should he lose control of the demonic sword. However, Raven only on the condition that the mission play out according to his rules.

When the two finally get the box Yoshimitsu had now gone insane(as hinted because his eyes were now red). Yoshimitsu attacks Raven who teleports on top of the box. but failed to realize that it had opened. It then closed with Raven inside and Yoshimitsu is later seen carrying the box with Raven shouting to let him out. 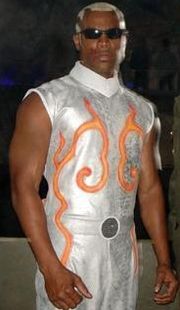 Raven appears in the Tekken Movie as a secret agent fighter. In the film, he gets to the semi-finals and helps Jin out for part of the movie.