Jack-4 is a non-playable character in the Tekken series of fighting games. This version was mass-produced and sent to attack Heihachi Mishima and Kazuya Mishima at Hon-Maru. Apparently, this model has a self-destruct feature, as shown in the Tekken 5 opening movie, where a Jack-4's head opens up to reveal an internal time bomb. The massive explosion wasn't enough to kill Heihachi, but the blast did however throw him several miles as well as free Jinpachi Mishima from his imprisonment.

Jack-4 makes its return to the series in Tekken 7, where Heihachi and Kazuya must fight through a wave of models at Honmaru. 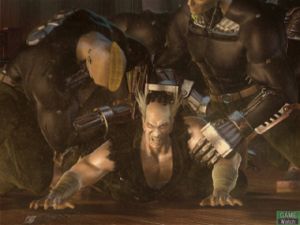 Heihachi Mishima and the Jack-4s.