Miharu Hirano (平野 美晴 Hirano Miharu) made her first appearance in Tekken 4 as an alternate "costume" for Ling Xiaoyu. Miharu later reappears in Tekken Tag Tournament 2 as a character separate to Xiaoyu, no longer being an alternate costume. She is Xiaoyu's best friend and fellow schoolmate at Mishima High School.

She is Japanese with short, auburn hair and brown eyes. Additionally, she also practices the same martial arts moves as her best friend. One could note that they train together (it is possible that Xiaoyu taught Miharu simply because she is her best friend). Like Jin Kazama, Miharu also calls Ling "Xiao" as a nickname.

Miharu appears as a palette-swap for Ling Xiaoyu in Tekken 4, sharing the same prologue and epilogue. However, due to a bug in the coding, Ling Xiaoyu players prefer Miharu, as she has a slight advantage in terms of fighting.

Epilogue (In-Game Text)
Xiaoyu defeated Heihachi. No one foresaw this outcome. Soon thereafter, Xiaoyu learned of Heihachi's many evil deeds. He was clearly guilty of supporting the raid on G Corporation. The evil nature of the Mishima Zaibatsu was finally revealed.

Ending (Unofficial Synopsis)
Ling Xiaoyu won the tournament and took over the Mishima Zaibatsu. Miharu Hirano visits Xiaoyu in her new office, and lightly scolds her for looking like she does nothing. Xiaoyu casually asks her friend how she did in her college entrance exams, and Miharu confesses that she has flunked all of it. Wanting to help her friend, Xiaoyu offers her a job, stating that from now on, she is going to make her own dreams come true.

She tells Miharu that she saw Jin Kazama after the tournament. He told her that if she has a dream that she wants to come true, she should make it happen herself. Miharu lightly teases her, and recognizes the change in Xiaoyu, who used to depend on everybody else. Miharu agrees on working together, and asks her friend what her dream is.

Xiaoyu points outside, to her very own amusement park, which she wants Miharu and her to build together (This ending is not canon). 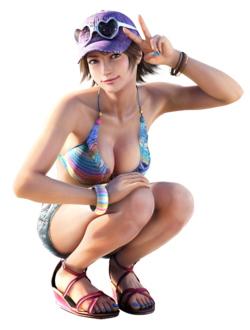 Miharu will be featured as a DLC character in the console version of Tekken Tag Tournament 2.

Miharu's moveset differs from Ling's in the sense that Miharu shows less experience in fighting. Occasionally, Miharu will collapse with moves that Ling could normally do and land properly on her own. Additionally, Miharu retains moves that her friend has "forgotten" throughout Tekken 4-6.

A cheerful and laidback hight school girl. She's best friends with her classmate from Mishima Polytechnic, Ling Xiaoyu, and the two hang out often together. It's never boring as she follows Xiaoyu around with her wild antics[1].

Miharu, Xiaoyu, Panda and Alisa are all walking down a street, heading towards an amusement park. Miharu and Xiaoyu have a discussion on when they last went to an amusement park and Xiaoyu doesn't appear to remember it. Alisa remarks to Panda that the two seem very close. The four then arrive outside the amusement park and Alisa receives an advertisement off a man. She excitedly shows it to the others; it offers to pay people to partake in filming nearby. The group accept the offer. Suddenly, a commotion occurs nearby and Alisa and Panda go to check it out. Xiaoyu then tells Miharu she remembers the last time the went to the park but it was when Miharu broke up with her boyfriend and she didn't say in case it upset Miharu. The actors nearby then start applauding and celebrating as Miharu takes a picture with Xiaoyu. [1]