This article is about the first King. For the second, see King II.

King (キング Kingu) first appeared in Tekken and returned for Tekken 2. King was a masked wrestler who fights to help fund and support his orphanage. Armor King was King's friend and rival and he served as King's sub-boss in both Tekken and Tekken 2. After the second tournament, King was attacked and killed by Ogre. In Tekken 3 and onwards, a second King took his place, and is still present.

His title in the original trilogy is Beast Priest. 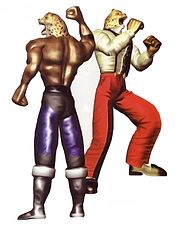 King uses a variety of attacks and throws commonly seen in wrestling. His dashing uppercut (called K's Flicker in game) can be used to punish missed attacks, as it launches foes into the air for a juggle. His Elbow Sting, a basic mid poke attack, grants him huge frame advantage if blocked, which he can use to land guaranteed attacks, although a K's Flicker will not launch opponents if used right after it's blocked. He also has a short low jab-uppercut string which is extremely quick, difficult to block (since low jabs are effectively low attacks in Tekken 1) and thus can be used for chipping away the opponent's life. Of course, since he's a wrestler he also has the best arsenal of throws in the game (along with his sub-boss, Armor King), most of which can deal enormous damage. King lacks an unblockable attack, but can make up for this with his throws and the enormous advantage after his Elbow Sting.

Prologue (Manual)
A mysterious masked wrestler. He is an outstanding young man who usually takes care of orphans. However, once he puts on his mask he turns into an extremely strong masked wrestler who cannot be stopped by anybody. He is taking part in the tournament in order to get funds to fund an orphanage. In the past he was an orphan himself and was taken in by a friendly family.

Ending, "Church" (Unofficial Synopsis)
An orphanage is shown, and kids begin running out of it. King is standing outside, and all the kids go around him, jumping up and down with joy. 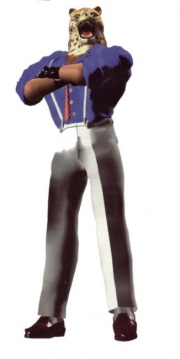 King's overall effectiveness is diminished since Tekken 1, despite the added moves and throws. His K's Flicker no longer launches on regular hit, only on counter hit. Low jabs in Tekken 2 can be blocked by a standing guard, and as a result, his low jab to uppercut string is not as useful for chipping life away, but it's still a powerful tool for poking and interrupting enemy attacks. His advantage after a blocked Elbow Sting is also gone. King incorporates chain throws in his moveset, but due to the slow startup it's difficult to catch opponents with them. On the good side, King's new unblockable attacks can prove very effective, if used in the right situation. King's unblockable attacks are noted for lacking flashing light effects on startup, contrary to most unblockable attacks in the game, and are therefore more difficult to react against. As with the rest of the character roster, King's basic throws are broken, but his command throws still are unbreakable and still yield a good deal of damage.

Prologue (Manual)
King helps orphans by managing an orphanage with money he earns from Pro Wrestling. Unfortunately, the orphanage is running out of money and King has turned to heavy drinking. He decides to participate in the tournament to regain the children's hearts and to pull his life together.

Ending, "Children" (Unofficial Synopsis)
King is standing outside of his orphanage, watching his foster children celebrate Christmas around an attendant. It is snowing outside. Ashamed after having lost the tournament, King leaves some presents outside for the orphans and walks away, but is stopped by the happy children who run after him. His happiness is then restored.