Jinpachi Mishima (三島 仁八 Mishima Jinpachi) is the final boss in Tekken 5 and Tekken 5: Dark Resurrection. In both games, Jinpachi is unplayable. However, Jinpachi is a playable character in the PlayStation 3 release of Dark Resurrection, which is called Tekken 5: Dark Resurrection Online. He made his return as a playable character in the latest game of the series, Tekken Tag Tournament 2. Jinpachi is the original founder of the Mishima Zaibatsu and the one who eventually announced The King of Iron Fist Tournament 5. After Heihachi Mishima betrayed him and stole the Mishima Zaibatsu from him, Jinpachi was imprisoned in a chamber under the mishima estate for 40 years. He escaped when an explosion broke the seal restraining him and he managed to break free from his prison. He gains inhuman strength because he becomes possessed by an evil force.

On Twitter, many fans ask the Tekken creator (Katsuhiro Harada) of Jinpachi and the Devil Gene. Harada stated that Jinpachi didn't possess the Devil Gene and that a revengeful ghost possessed him. Interestingly though, in both console versions of Tekken 5, Jinpachi's ending it states that he's possessed by the Devil. Also, in his interlude with Heihachi, Heihachi theorise that his father has the Devil's blood. In the Tekken 6 CG art book in the character history section it states that Jinpachi has the devil gene, it says that he is a unique link within the Mishima bloodline, in which the Devil Gene appears after him. When fans mention this on Katsuhiro Harada's twitter page he later reveals that Tekken Project team dared to mislead fans (sometimes). He also said the Tekken story progresses in 'parallel' and that Tekken only has one canon (story setting) and if Tekken only had one canon story, it will be boring. This means that in the development of Jinpachi's Tekken 5 story he was meant to have the devil gene but his story was changed into a new parallel continuity. At the end of Tekken 5, Jin Kazama kills Jinpachi and he actually thanks him for his actions.

Jinpachi uses an array of unblockable moves in Tekken 5. One of his unblockable attacks is a fireball that Jinpachi fires from the mouth in his abdomen. Jinpachi will usually fire only one fireball, but he can fire two or more if his opponent is close enough to him. The fireball(s) are best avoided by sidestepping or by laying down on the ground, but can be evaded by other means. He is also able to disrupt an opponent by using a move that stuns their motion, regardless of the opponent being on the ground or airborne. This move leaves the opponent open to any attack Jinpachi decides to throw at them. Jinpachi also has a move in which he absorbs a small part of his opponent's health. Also, after his opponent is launched, he can strike with three Electric Wind Godfists. 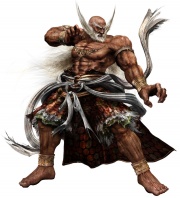 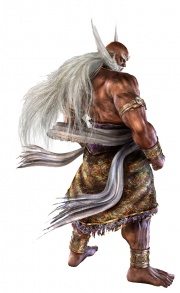 Jinpachi is capable of stunning opponents with an unblockable stun and he also possesses a "line-filling" demonic inferno attack that can't be blocked, but dodged by side-stepping or other unique moves (such as the "Play Dead", "Art of Phoenix", and "Hunting" stances of Lei Wulong, Ling Xiaoyu, and Kuma/Panda, respectively).

Death: Jinpachi moves around and screams, writhing in pain, for a while before dissolving into dust and disappearing.
The Final Transformation: Jinpachi sadly says, "It looks like nobody was able to stop me." Jinpachi sheds a tear that appears to be blood. The spikes on his back grow longer, and the spikes in his arms grow longer. Jinpachi screams for a while. Jinpachi causes a huge explosion. A beam is shown shooting towards the sky. A black screen is shown, and words (in white) say, "Jinpachi's mind is consumed by the devil as he reaches his final transformation. The world will never be the same." You can unlock this video by either buying it on PSP version, or letting Jinpachi kill you in last round and not to retry. 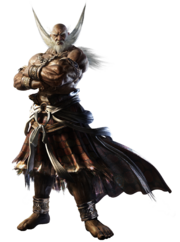 Considered to be the "Ultimate Fighter" from warriors the world over, Jinpachi stepped out of the limelight after losing to his son, Heihachi Mishima. He wan once imprisoned underground for years, but come back to life after Honmaru was destroyed[2].

Jinpachi is seen inside Heihachi's estate looking for it's owner. He finally finds Heihachi in a room and is upset that Heihachi had betrayed him, but Heihachi just remarks that Jinpachi was back from the depths of hell. Jinpachi unleashes his energy on Heihachi, who seems to have little difficulty in standing it off. Jinpachi decides to increase the amount of power and seemingly kills Heihachi and setting his room on fire.

Jinpachi appears in the free-to-play online game Tekken Revolution as one of five possible Stage 7 sub-bosses (the others being Heihachi, and, on much rarer occasions, Mokujin, Tetsujin, and Kinjin) in the Arcade Battle mode. He retains his appearance and moveset from Tekken Tekken Tournament 2. As with the other sub-bosses and final boss Ogre, Jinpachi has not been made playable in this game.