Player One: Jinpachi's most known outfit is an unplayable "devil" form with stretched gold belt, red torn pants with patterns on them, purple skin/aura, red eyes, and a mouth in his stomach, from which he could shoot fire balls from.

Interlude Outfit: Jinpachi's pants are retained but he is in his human form with his jewelry.( The human form is only seen during most interludes. ) 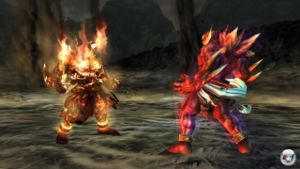 Jinpachi's appearance as an unplayable Final Boss outfit from Tekken 5 returned in the game. It is almost identical to his Player 1 outfit but now with white eyes, a white horn portruding from his head fire and magma-like substances around his body. (It was meant to match his T5: DR Inferno stage.)

Player 3 : He is in his human form again, however his red pants are recolored in Jade green.