His main notabilities was his lack of original moves and his attacks on various fighters of Tekken 2. The entire situation was that he had attacked various fighters and that he stole some of their moves during the attack such as Jun's Windmill kick or Baek's Hunting Hawk. Though he was only confirmed to have attack Baek, Jun and the first King his moves are also taken from Lee, Anna, Wang, Bruce along with various Tekken Force members. These attacks would result with the hatred of various characters namely, Hwoarang, Jin, and the second King. In Street Fighter X Tekken Jin and Hwoarang still remember Ogre's actions towards Jun and Baek as seen in both of their win quotes against him. His influence as a "fighting god" can be seen in Street X Tekken as characters like Steve and even Akuma recognize and respect his immense strength. His origins are unknown as he had emerged from earth but his story shows that he is a weapon left on earth by unknown creatures, Julia had even called him a legendary living biological weapon in her win quote.

Ogre's blood also shows a very strong rejuvenating properties, as it was sought after heavily by Heihachi and Yoshimitsu. In Heihachi's prologue from Tekken 4, Ogre's blood was one of the necessary components that Heihachi had to immortality, the other being the less stable Devil Gene. Yoshimitsu's ending involved Dr Boskonovitch using Ogre's blood on a mouse, resulting in the mouse mutating to ginormous proportions.

Prologue
The God of Fighting... The legend of Native Americans says Ogre is the war weapon which creatures from outer space left on earth in ancient time. It understands entire structures of all living and artificial beings, and absorbs them. It wanders the earth in search of strong souls.

Ending, "Awakening" (Unofficial Synopsis)
Ogre has successfully transformed into its true form, True Ogre, and bursts through the temple. Tekken Force helicopters have arrived to shoot True Ogre. However True Ogre destroys both helicopters with a fire breath and a slam. He then roars as the temple burns behind him. 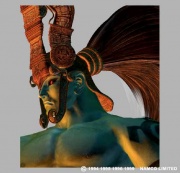 Ending (Unofficial Synopsis)
Ogre picks up an unconscious Jin Kazama with one hand. It holds him up and looks at him for a few seconds. Then, Ogre notices something, turns around, and drops Jin. It is revealed to be Unknown, who is shown without the wolf-like creature. Unknown stares at Ogre, and Ogre stares at Unknown. This ending takes place in Ogre's stage. 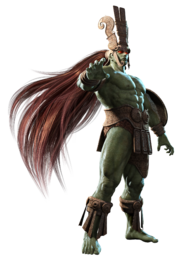 Ogre will be featured as a DLC character in the console version of Tekken Tag Tournament 2.

Brutal and ruthless, Native American legend says the Ogre was a weapon of war that creatures from outer space left on earth in an ancient time. It understands entire structures of all living and artificial beings, and absorbed them. [2]

A mysterious entity unearthed from ancient runes. The Ogre legend speaks of it being a weapon of destruction left by alien creatures eons ago. It’s said to have the ability to understand all life forms and man-made structures, and to absorb them into itself. It wanders the earth, seeking out stronger souls, but the rest of it is shrouded in mystery. [3]

A mysterious entity unearthed from ancient ruins. Rumor has it that it was a weapon of mass destruction left here by extraterrestrials. With an in-depth knowledge of the makeup of every living creature and man-made object on the planet, it has the ability to absorb these things into itself. It seems to have no other drive aside from satiating its thirst for even stronger souls[1]. 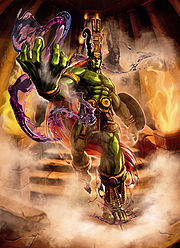