Baek first appeared in Tekken 2 as Marshall Law's Stage Eight sub-boss. The reason for this is because Baek Doo San went on a rampage after accidentally killing his father. Baek destroyed many dojos, including Marshall's. In Tekken 3 he's not present and he's, in a sense, replaced by his pupil, Hwoarang. In Tekken 3 and Tekken Tag Tournament, Ogre / True Ogre used some of Baek's moves (such as Baek's "Hunting Hawk" move). In Baek's Tekken 5 / Tekken 5: Dark Resurrection Prologue, it is mentioned that, on his way home from training, Baek was attacked and knocked unconscious. Baek woke up in a military hospital. According to the Defense Minister, he had been in a coma for over a year.

Baek's story in Tekken though somewhat notable due to his role as a master to Hwoarang and as an attacker of dojos is often overshadowed by other more popular characters such as the Mishimas and at times even his own student. Baek was basically relatively kind but misguided in his first appearance in Tekken 2. In order to protect himself as well as to earn money, he was forced to attack various dojos, one of which would cause him to incur the wrath of its owner, Marshall Law, who still refuses to forgive Baek as revealed at the Tekken 6 Scenario Campaign. After his defeat at Law's hands, Baek seemed to have moved past that section of his own life, even earning a trusted student in the form of Hwoarang. This happiness and stability for Baek would not last long however as he would later be attacked by Ogre and was left for dead. Though Hwoarang thought that Baek had already died, in reality Baek had simply been knocked out, and wouldn't wake up until a year later. Upon hearing of his student's court martial, Baek immediately requested the military to not only repeal the punishment but to also forgive Hwoarang. He would later send Hwoarang a letter requesting him to go back to the military and continue training, something that Hwoarang would never expect to see. Though he intended to fight or see his student's progress in the fifth tournament Baek withdrew immediately when he heard Hwoarang was hospitalized after fighting Jin Kazama. Baek would later seem to share Hwoarang's hate to Jin especially after Jin's declaration of war.

Baek can initially be considered as a cold-blooded attacker who sees no harm in attacking innocent people in order to gain money due to his Tekken 2 Story. This, however, would not entirely prove true because Baek had only transformed like this due to his own trauma of killing his father during sparring. After recomposing himself after the second tournament, Baek had met Hwoarang in the years in between Tekken 2 and 3. He would also value Hwoarang greatly due to Hwoarang's skill, but Baek would usually be the one responsible for disciplining Hwoarang. Baek though strict is well-known to have trusted and valued his student well. His Tekken Tag Tournament 2 ending had even showed that though Baek is still traumatized by his own father's death, he believes that his new obligation now is Hwoarang, and continues to live for Hwoarang's sake. This would be shown most notably in his Tekken 6 ending where Baek had sacrificed himself in order to save his own student. Though it cannot be denied that Baek had once attacked dojo without relent or killed his father by accident, he has realized his mistakes and now tries to improve himself. He greatly values Hwoarang despite the latter's disobedient nature and constant desire to fight.

His title in the original trilogy is Killing Hawk. 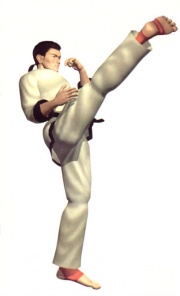 Baek's father was one of the foremost experts of Tae Kwon Do. During his childhood, he learnt the ways of this martial art and won many tournaments, until an injury forced him to quit the sport. This lead Baek's family into terrible poverty and angered Baek. This rage towards his family's dissention caused Baek to kill his father after a furious argument. Grieving and full of remorse, Baek was taken into police custody, where he spent most of his childhood. During this time, his Tae Kwon Do skills became legendary, as he became totally focused on his fighting prowess, wishing to honor his father. After three years, he fled the police home and took to the streets, becoming a pit fighter of great strength, as well as a firm audience favorite, striking his opponents again and again to see them reduced to a bloodied mess. Tracked by a secret organization aware of his past, Baek was coaxed into the assassination of the owner of a property wanted by the group, a certain Marshall Law. Baek was only partly successful, and he enters The King of Iron Fist Tournament 2 to finish his task and destroy Law.

Ending (Unofficial Synopsis)
Baek sits on a bench outside a park, as he takes out a locket containing a photo of him and his father. Baek reminisces about his training sessions with his father, remembering the great person he was and how much he loved him. Remembering his father for the man he was, Baek finally accepts his father's death, finding peace within himself. 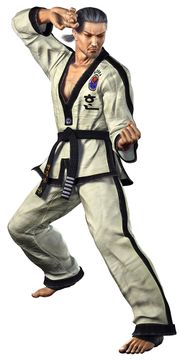 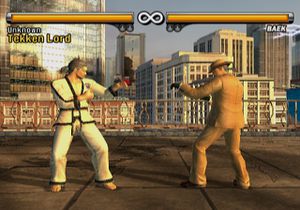 Prologue (In-Game Text)
Baek Doo San. A master of Tae Kwon Do. On his way home from fighting, Baek was attacked and knocked unconscious. He woke up in a military hospital. According to the Defense Minister, he had been in a coma for over a year. The Minister asked Baek to help train soldiers, and he hesitantly accepted. A year later, Baek writes to Hwoarang and asks him to return to the military. Hwoarang goes with his mentor. The two enter The King of Iron Fist Tournament 5 as master and pupil.

Interludes (Unofficial Synopsis)
Stage 4, Marshall Law: Baek asks Marshall if he would mind letting him test out his Tae Kwon Do skills. Marshall responds by assuming his fighting stance, and a battle ensues. When Baek wins, he tells an unconscious Marshall that he holds instructional sessions on Sundays at his dojo, and invites Law to join in on one of his sessions.
Stage 7, Hwoarang: Hwoarang runs up to Baek saying, take it easy! that he'll... Baek says that he is fine and that they have not sparred in a while. When Baek wins he tells Hwoarang, he still has a lot to learn and tells Hwoarang to train some more. Hwoarang walks away, clutching his chest. Baek then says to himself, to take care of the real business. And sees what is going here at the tournament with his own eyes.
Final Stage, Jinpachi Mishima: Baek wanders through Ground Zero. Jinpachi walks behind him. He tells Baek that he is impressed that he has made it thus far. Jinpachi introduces himself and declares that his goal is to destroy all existence. He transforms into his demonic form, and the screen becomes white.

Ending (Unofficial Synopsis)
Hwoarang is first shown confronting three thugs in the street. Before he can throw a kick, he immediately stands straight with arms attached to legs after someone shouts "Still up to no good". As he slowly turns around, he is shocked to see Baek personally arrive. One of the thugs immediately knocks Hwoarang down with a kick, before approaching Baek. As Hwoarang gets up, he immediately exclaims, "Don't, you idiot!", before Baek quickly defeats all three thugs. As Hwoarang shakes his head, Baek immediately grabs Hwoarang by the collar, and begins dragging him away. 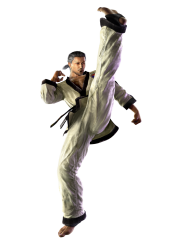 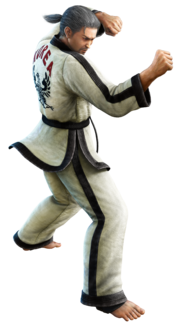 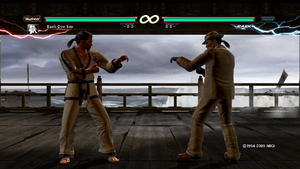 Prologue (In-Game-Text)
Baek joined The King of Iron Fist Tournament 5 along with his apprentice, Hwoarang. After he learned that his student had been critically injured by his rival--Jin Kazama--Baek withdrew from the Tournament and hurried to the hospital. Emergency measures were taken and Hwoarang's life was saved, but he was unconscious. Baek was wrought with guilt that he had failed to prepare Hwoarang for his encounter with Jin. Hwoarang woke up three days later, and when he learned about the events that had passed, he forced himself out of bed and proceeded to beg his mentor to train him and make him stronger. He implored his master with such humility that Baek, sensing the intensity of Hwoarang's will, dedicated himself fully to developing his pupil’s abilities. After they returned to Korea, Baek engaged Hwoarang in the most extreme training regimen he had ever designed. The Mishima Zaibatsu announced The King of Iron Fist Tournament 6 as Baek trained both himself and Hwoarang for the ensuing battle.

Ending (Unofficial Synopsis)
After defeating Azazel, Baek falls to one of his knees causing Hwoarang to rush to him, concerned over his master's condition. As Baek gets up, so does Azazel. But as Azazel tries to attack Hwoarang, Baek intercepts and kicks Azazel, destroying his orb in the process and causing it to disperse into nothingness. However, the attack takes its toll as Baek falls onto the floor and apparently dies, leaving Hwoarang to cry out in anguish for his fallen master.
Scenario Campaign(Unofficial Synopsis)
In the Scenario Campaign of Tekken 6, Baek is a boss at the West Coast Canal Industrial Complex. He, along with Miguel, is a member of an independent resistance led by Hwoarang. 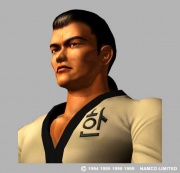 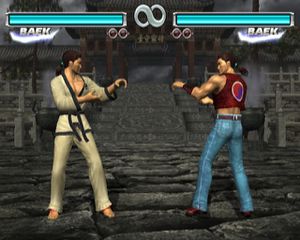 Baek is featured as a playable character in Tekken Tag Tournament, a non-canonical Tekken game.

Ending (Unofficial Synopsis)
Hwoarang (Stage) A closeup of Baek's face is shown. A few seconds later, it is revealed that Hwoarang is with him. Then, Hwoarang sits on his lower legs and knees. This ending mostly shows Baek talking to Hwoarang. Since Hwoarang doesn't appear to be glad to hear what he's saying, Baek is most likely either scolding him for something or saying that he needs to train more. 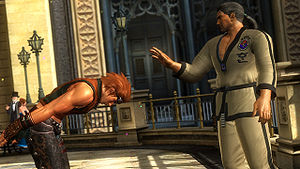 The team of Baek and Hwoarang.

Baek will be featured as a playable character in Tekken Tag Tournament 2.

A Taekwondo master and Hwoarang's instructor, Baek Doo San coaches soldiers in the art. He participated in the King of Iron First Tournament 5 to evaluate Hwoarang's progress, but when his pupil suffered major injuries at the hand of Jin Kazama, he dropped out of the tournament early. Afterward, Hwoarang begged his mentor to make him stronger with more humility than he had ever shown before. Baek, sensing the intensity of Hwoarang's will, decided to teach everything he knew to his pupil[1].

Baek is seen in his dojo reminiscing his time together with his father. He then punches the floor as he remembers the time he accidentally killed his father. Hwoarang, who was secretly watching, becomes concerned for his master, so he decides to let Baek get mad at him to lighten him up and does so by shouting that he had overslept and his hopes that Baek doesn't catch him. Baek then smiles slightly before proceeding to punish Hwoarang for his tardiness.