Baek started off as a sub-boss character for Tekken 2. He has worn a beige Tae Kwon Do uniform throughout all of his appearances as his Player 1 outfit. Through the series Baek also has the same ponytail hairstyle, but due to aging, his hair color changed from black to grey.

His Player 1 outfit is a Beige Tae Kwon Do fighting uniform with black stripes and a symbol on the back with the writing "KOREA" on it. He also wears red footguards.

His Player 2 outfit consists of light blue jeans, brown shoes, black wristbands, and a brown sleeveless vest with a blue and red Yin-Yang symbol on the back. In this outfit it has alos his pendent around his neck.

His Player 1 outfit is an updated version of The one in Tekken 2: his footguards are black instead of red, It also has a black outline with added symbols such as, a logo on the left side of his Jacket, being red and blue like the Korean flag but, having a picture of a hawk flying in the middle of it. The back of his Jacket has a picture of a hawk as well.

His new Player 2 outfit consists of a tan suit with some trousers, a white shirt with a black tie, a brown vest under his jacket, and a fedora hat. He also wears some black gloves and brown moccasin shoes. 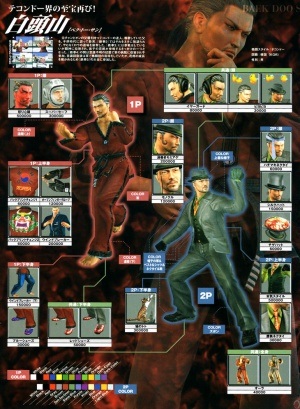 As for almost every character from Tekken 5, Baek's Player 1 and 2 outfits have been recolored in Dark Resurrection.

Baek's only change in his Player 1 outfit is his dobok which is now dark red instead of beige.

His Player 2 outfit changes his suit from tan to grey. His gloves, vest, and moccasin shoes become dark green his dress- shirt however, is a lighter green. Finally, his tie is also changed to orange.