Tekken Tag Tournament (also abbreviated as TTT) is the fourth game in the Tekken series and was listed as the 23rd best game on the PS2 by IGN in the year 2007. It was the first game to incorporate several features, the most obvious being the Tag System. The Tag system allowed a player to select two characters that form a tag team; the selected characters are able to fight against other tag teams which could be AI controlled or two characters controlled by another player in Versus Mode. It is however still possible to play 1-on-1 versus fights.

Tekken Tag Tournament also incorporated a new variable known as endurance, which was never featured again. Additionally, it created the basis of the Tekken 6 Rage System through the presence of Netsu Power.

The game features 40 characters, which was the largest character roster for a Tekken game before Tekken 6. 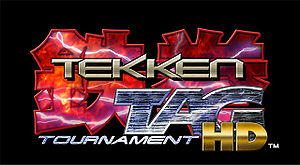 Tekken Tag Tournament HD is a remastered version of Tekken Tag Tournament, was released on December 1, 2011. The game came on the same Blu-ray Disc as Tekken: Blood Vengeance and is accessible if the disc is loaded on a PlayStation 3 (the entire package is referred to as Tekken Hybrid). The game is based on the PlayStation 2 version and features updated HD visuals, similar to the God of War Collection or The Sly Collection. The game includes Trophy support.

Tekken Tag received positive reviews with critics. GameSpot giving it a 9.6 out of 10. It has an aggregate score of 85 on Metacritic. IGN gave it an 8.7 out of 10 praising its graphics and character moves. In 2007, IGN listed Tekken Tag Tournament as the 23rd best game on the PlayStation 2.[7] As of 2008 PSM states Tekken Tag is regarded as the best installment in the series. In an article by GamePro Tekken Tag Tournament was praised for its visuals stating such things as, "The fighting backgrounds were also astounding-especially Eddy Gordo's stage where you could see individual blades of grass!"[8]

Tekken Tag Tournament is not a part of the Tekken canonical storyline. This allowed Namco to bring back the characters that did not appear in Tekken 3 (such as Baek Doo San, Bruce Irvin, Jun Kazama, Kunimitsu, and Michelle Chang). The ages of the characters in this game are the same as the ages that they had in the last game that they were in.

Because Tekken Tag Tournament is a non-canonical game, it has no story. It is more of a compilation of Tekken, Tekken 2, and Tekken 3, allowing players to use almost every character in the Tekken series. The only characters that did not return from previous games are the first King, Marshall Law, the first Jack robot, the first Kuma, Gon, and Doctor Boskonovitch (although Dr. Boskonovitch does make a cameo appearance in Tekken Bowl).

Tekken Tag Tournament, being the first Tekken title for the PlayStation 2, featured vastly detailed graphics and improved quality music. It was also notable for having the largest character roster in the series until the release of Tekken 6, boasting an extravagant 40 characters, all returning from the previous installments in the series, with the exception of Unknown, the boss character, and Tetsujin, a costume swap for Mokujin. Unknown is similar to Mokujin in that she can replicate other fighting styles, but she can also switch styles by clicking the right analogue stick. Tetsujin has only appeared in this game. Finally, its most important feature is its tag system. A player selects two characters and may tag out between them to utilize special combos and throws. Characters can be tagged out to recover energy, but if one character is KO'd, the round ends. When in Team Battle mode, the fights are also tag fights unless there is one person left on a team where they will fight alone.

Tekken Tag Tournament included a minigame called "Tekken Bowl", that challenged the player to use a team of characters to play a bowling game. Depending on the player's selected character, different attributes would be placed into effect in the mini-game. For example, Bryan Fury has a powerful roll due to his super strength, and he can use a targeting system to make more accurate shots because of his cybernetic enhancements. A physically weaker character like Xiaoyu would have a much less powerful strike, but would be easier to control when placing the spin and amount of force on the ball. Strong characters who accidentally bowl at the maximum strength find themselves shooting across the lane with the ball still attached.