From Tekkenpedia
(Redirected from Wang)
Jump to: navigation, search

Wang Jinrei (王 椋雷 Wáng Liángléi) was introduced in Tekken, and he has returned for every other Tekken game, except Tekken 3 and Tekken 4.

In Tekken 3 and Tekken Tag Tournament, Ogre/True Ogre used some of Wang's moves (such as Wang's "Waning Moon" move). This implies that Ogre attacked him before the events of Tekken 3, but it has never been confirmed.

Wang though generally not popular with fans, and at times a joke character, has held very important roles in various tournaments. These roles are often attributed to his knowledge regarding the Mishima Zaibatsu. Though he's generally unsuccessful in the tournaments he entered (losing all but one tournament that he entered), Wang can still be considered as someone strong considering his age. He generally values respect greatly as well as holding great pride in his experience as a fighter. Due to his surname difference with his granddaughter, Xiaoyu, it can be assumed that he is the father of Xiaoyu's mother, though the statement has yet to be confirmed. Wang doesn't seem to begrudge the fact that he loses, but he feels responsible for allowing a war to occur in Tekken 6 due to his failure to defeat Jin. Wang is actually very knowledgable with his surroundings. Such examples have won him the admiration and respect of fighters such as Zafina and Lee. Aside from his granddaughter, Wang is particularly close with the Mishima Zaibatsu's founder, Jinpachi Mishima. It can be thought that the two have known each other for a long time as it was Wang who Jinpachi had written a message for. He's also very close with Lee with Lee referring to Wang respectfully as master in the Scenario Campaign while Wang refers to Lee as Chaolan. He also is very friendly with his sparring partner, Lei.

Wang is generally well known by characters for both his knowledge and experience. Lee had acknowledged Wang's experience and knowledge, and dutifully made it his obligation to bring honor back to the Mishima Zaibatsu. Jinpachi knew Wang very well and knew that only Wang could be trusted fully with the task of killing Jinpachi, and thus he sent Wang the letter in order to bait him to the fifth tournament. Wang recently has been blaming himself for the fates of different characters. He blames his own incompetence at failing to find a way to save Jinpachi while not killing him or his own failure in defeating Jin which would lead to Jinpachi's death and the Zaibatsu's declaration of war.

His title in the original trilogy is Master Fighter. 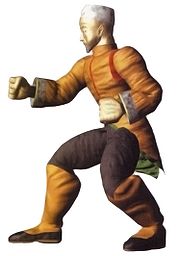 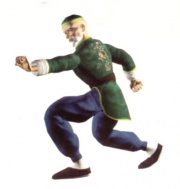 Wang was a companion of Jinpachi Mishima, Heihachi's father. Wang watched Heihachi and Kazuya with great interest as they grew and chose their respective paths of life. Wang remained generous and kind whilst living as a recluse in the Mishima gardens. Now, Wang tends to the huge number of vegetables in the gardens, finding time to hone his awesome (and highly individual) martial arts skills. Every morning at the crack of dawn, he can be seen strolling down the mountains gazing at the clouds. his lithe athleticism, despite his age, has meant that his inner chi strength is channeled with great purity of spirit, despite his frail bones. His reason for entering The King of Iron Fist Tournament 2 is to carry out the final wishes of the long-dead Jinpachi. During his life, Jinpachi watched with grief as Heihachi and Kazuya followed the path of evil. He instructed his faithful friend to eliminate both of them when the time was right. Wang theorizes that the best way to fulfill this plea is to face all challengers, giving way to those adept enough to defeat Kazuya, and dispatching of those unworthy of his attention. Heihachi will stare into the face of destiny at another time.

Ending, "Celebration" (Unofficial Synopsis)
Wang walks up a hill while the sun is setting. He approaches a gravestone(may be Jinpachi Mishima's ). Wang pours a bottled drink on the top of the grave stone. Then, Wang pours some of the drink into a small cup. He drinks from the cup, and then he exhales. A close-up of Wang's face is shown as the ending video ends. 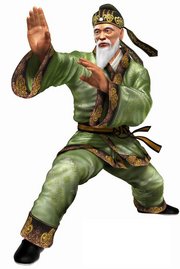 Prologue (In-Game Text)
Long ago, Wang had a close friend from a distant land... Jinpachi Mishima. Just as the world was about to be engulfed in the flames of war, his friend come to him and said "In order to bring about peace the Mishima clan must be destroyed". Jinpachi disappeared leaving these words behind. Some time after, Wang learned of the death of his friend as the world was embroiled in war. Thirty years later, Wang was living in isolation when an invitation to the King of Iron Fist Tournament 5 was delivered. Along with it was a message... "I need your help, old friend. Seek me out, Wang Jinrei". The letter was signed, "Jinpachi Mishima". Believing his friend to be dead, Wang Jinrei was quite surprised by the message and decided to enter the tournament to look for Jinpachi.

Interludes (Unofficial Synopsis)
Stage 4, Ling Xiaoyu: Xiaoyu prepares for her next fight. She is shocked to find out that it is Wang. She asks him what he's doing here. Wang replies that he's busy and he can't discuss specifics. Xiaoyu replies that she has to win. Wang tells her to go away. Xiaoyu screams, "I hate you Grandpa!" After Wang wins he explains that he had no choice, and that a sad and painful result awaits the end of the tournament ("A future much worse than you could ever imagine."). Wang walks away.
Stage 7, Feng Wei: Wang tells Feng, "I don't know what your intentions are, but get out of here. I have my own troubles to worry about." Feng remains silent. Wang says, "Young people nowadays... Come on..." After Wang wins, Wang says that this is as far as he can go, and he asks what he has to say for himself. Feng remains silent. Wang replies, "Well, at least you accept defeat. Practice, young one, practice. That is all you have to do. I wish you the best." Feng gets up off of the ground as Wang says this. Wang walks away while laughing. Feng puts a fist in his palm to bow as he watches Wang leave.
Stage 8, Heihachi Mishima: Wang is surprised to find Heihachi alive, and he asks him how he survived the explosion. Heihachi asks him, "Wang, Jinpachi was in charge of this tournament, was he not?" Wang replies, "I can't say for certain... but it is very likely." Heihachi says that he'll be the one to stop him, once and for all. Wang says that he won't let Heihachi fool him again. After Wang wins, Heihachi is shown crouching. Heihachi asks him, "Wang Jinrei, how can you?..." Wang replies, "Power is not the same as strength. Until you understand this, you will not be able to defeat me. Wang turns his back to Heihachi and says, "Will things ever change? Why do I have to hurt my friends to do the right thing?..."
Final Stage, Jinpachi Mishima: Wang walks through Final Stage when Jinpachi appears behind him in demonic form. Jinpachi seemed to be in utter pain and says that he is surprised that Wang made it. Wang is shocked at his appearance, and he ask what happened to him. Jinpachi asks Wang to kill him. Wang refuses, saying that he will not harm his friend again. Jinpachi says that his consciousness is almost gone, and that it will be the end of humanity if the monster takes full control. Wang says, "There must be another way!"

Ending (Unofficial Synopsis)
Wang has defeated Jinpachi Mishima. Jinpachi's "Devil" form fades away, leaving only Jinpachi in his human form laying on the ground on his stomach. Wang holds Jinpachi, shakes him, and asks, "Jinpachi, are you ok?" Jinpachi replies, "I'm sorry I caused you so much trouble..." Wang says, "Don't say such things! We have been through so much and have always been like brothers." Jinpachi reaches up to Wang with one of his hands and says, "Jinrei..." Wang grabs Jinpachi's hand with one of his hands and says, "Jinpachi!" Jinpachi says, "I wish we could have had one last drink together...but I'm afraid my time has come... Good bye, my dear friend... It was fun..." Jinpachi turns to dust in Wang's arms. Wang runs his fingers through the sand that was Jinpachi while saying, "Jinpachi... Jinpachi!..." Wang continues talking, saying, "It's the curse of the Mishima bloodline!..." Wang gets up while saying, "Jinpachi...it appears that my time has yet to come!" A shooting star flies across the sky. 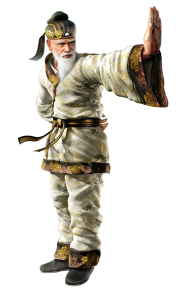 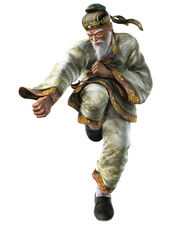 Ending, "The Death of Wang Jinrei" (Unofficial Synopsis)
Following his victory over Azazel, Wang prepares to leave before sensing Azazel's presence behind him. But as the monster was about to attack, Wang used a powerful elbow attack right on his foe's spine (though apparently it was the tail), causing the latter to disperse into an orb with magenta-coloured scarabs fading into nothingness. Yet, it also took it's toll on Wang as he murmurs "Jinpachi..my friend. My time has come." before falling onto his knees, saying "I'll see..you again..." as he falls onto the ground. 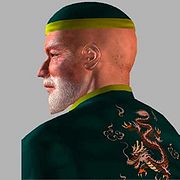 Ending (Unofficial Synopsis)
Wang and Ling Xiaoyu put their hands together. They move their arms around for a little while. Suddenly, Wang has a back problem, screams in pain, and falls to the ground. Xiaoyu notices this, and she walks over to him. Wang motions to his back with one of his hands. Xiaoyu puts her hands on her hips and smiles. This ending takes place in Forest Law's second Tekken Tag Tournament stage, which is called "Law-B". 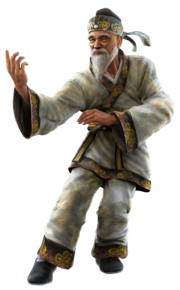 Wang will be featured as a playable character in Tekken Tag Tournament 2.

A Chinese Master Fighter, Wang heard about the cursed blood of the Mishima family from his friend Jinpachi Mishima. He tried to stop the related individuals but was defeated by Jin Kazama. Jinpachi fell in battle against Jin, who became the heir to the Mishima Zaibatsu. With the organization under Jin's control, the Mishima Zaibatsu rapidly began to build its military might. The world fell into chaos, leaving Wang to strongly regret his inability to stop the Mishima Zaibatsu before it went out of control. Regardless, he is intent on destroying the Mishima bloodline once and for all[1].

Wang is seen in a discussion table together with Jinpachi, Sebastian and Doctor Boskonovitch. Their main topic was their existence and future in the Tekken series. Wang points out that they aren't popular and his wish to be a stud. Jinpachi argues that the developers of Tekken knew that Wang was unpopular with fans, but didn't have the heart to take him out. He also points out how Wang died in his Tekken 6 ending. Wang says that Jinpachi can't talk so big as Jinpachi had turned into sand in Wang's Tekken 5 ending. Doctor Boskonovitch isn't worried as he says that he will be in the series as long as there will be the Jack-series, Yoshimitsu, Alisa and Bryan. Sebastian states that he doesn't mind being unpopular as long as he protects Lili. Boskonovitch now has a new idea to make them popular. He decides to turn everyone into cyborgs like Bryan. Later Ganryu and Baek arrive to see that plans were already being made to turn all four old men into cyborgs.