Jun Kazama (風間準 Kazama Jun) was introduced in Tekken 2. She was portrayed as a mysterious and fearless woman, a fighter for peace. Though initially entering the second tournament to stop Kazuya Mishima (She was a WWWC officer at the time), it was implied that the two were attracted to one another (With Kazuya's dialogue in the Scenario Campaign describing her as "Mysterious"), and eventually led to her impregnation of Jin. After the tournament, she moved on to a more reclusive life in the forests, however, Devil, who had lost his main host (Kazuya had been killed by Heihachi at this point), attempted to possess Jin though Jun successfully drove him away. Later in life, her peaceful life with Jin ended when Ogre began attacking and slaughtering participants of the second tournament. Jun was among his victims, as her windmill kick is among Ogre's command. During the struggle, she urged Jin to flee to Heihachi. This would be the last time Jin would see his mother as Ogre had knocked him unconscious. During her absence, a portion of Devil finally managed to enter Jin.

Though still missing, her continuous presence and teachings have helped prevent Jin from being completely controlled by the Devil Gene. The very first occurrence happened during the fourth tournament, where her image prevented Jin from killing his father and grandfather outright. In numerous occasions, Harada himself has personally stated that Jun's current status is only considered as "Missing", not dead. This has led to speculation on to her next canonical appearance in future Tekken games. Initially, prior to Tekken Tag Tournament 2's release, Harada stated that if he had enough followers and people who tweeted to bring Jun back, he would do so. Soon enough, he did receive more than the prescribed followers, and Jun was indeed included into the game.

Her title in the original trilogy is Ecological Fighter.

*only in the Arcade Intro

**Only in Jin's Ending as an apparition

The final boss of Tekken Tag Tournament is a character that is referred to as "Unknown". Unknown is an Asian-looking woman with glowing yellow eyes and purple slime coating her otherwise naked body. Behind her, some sort of wolf-like spirit acts out every move she performs, giving the impression that it is controlling her actions.

Unknown has the ability to copy all of the other characters' abilities, and the player can switch fighting styles on the fly simply by pressing down on the Right analog stick. What's interesting to note, however, is that Unknown starts with the fighting style of Jun Kazama at the onset of every battle. This, in addition to their similar features, have led many to believe that Unknown is a possessed Jun Kazama.

However, with the release of the Tekken 6 Art Book, Namco revealed in a small feature of Unknown that she was intended to be Jun's younger sister, but that the concept was scrapped. This explains their physical similarities as well as make room for why their heights aren't the same, making it impossible for them to be the same person.

Another interesting fact is that Jun seems to be completely replaced by a recent addition to the series named Asuka Kazama, both in terms of gameplay (they have the same moves, but Asuka has more moves than Jun). Asuka first appeared in Tekken 5. In previous Tekken games, Jun Kazama possessed strange angelic powers that allowed her to temporarily quell evil entities (such as the Devil which possessed Jin Kazama and, possibly, Kazuya Mishima).

Similarly, in her ending in Tekken 5, Asuka manages to reverse Jin Kazama's Devil transformation simply by touching him. She did not seem to be aware of this power, however, nor did she seem to notice Jin's transformed state at all. At the end of their encounter, Jin accidentally fell face-first onto Asuka's breasts and, after a momentary look of embarrassment, Asuka retaliated by punching him into a wall of rock and stomping away angrily, never finding out about their relation.

What's interesting is that, if Asuka does not know about her power (or her relation to Jin), then it's possible that not everyone with Kazama blood know they have this ability. Jun seemed to be able to sense the Devil within Kazuya Mishima (Jin's father), but Asuka has yet to show no such extraordinary sense, despite there being two individuals within the last two King Of Iron Fist Tournaments 5 and 6 who possessed the Devil Gene (Kazuya Mishima and Jin Kazama). However, it can be assumed that Jun's spiritual power is more powerful than Asuka's, for Jun was deemed the "Chosen One." Alternatively, Asuka could merely be unaware of her potential and, therefore, is unable to use her spiritual power to its greatest effect.

This may be attributed to several factors: 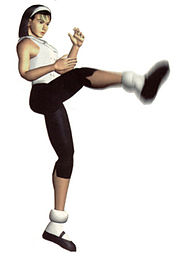 Jun is an officer of the WWWC, a wildlife protection organization. She is highly psychic and can sense a mysterious power surrounding Kazuya. Besides her duty to arrest Kazuya, who smuggles protected animals, she wants to free Kazuya of his evil power during the tournament.

Ending "Purity" (Unofficial Synopsis)
A forest is shown. Birds, a squirrel, and a horse can be seen. A yellow bus pulls up at the forest. Jun Kazama steps out of the bus and into the forest. Jun takes a deep breath. Some birds, a horse, a deer, and a squirrel come up to her. Jun lets the squirrel climb up one of her arms and onto her shoulder. A bird is resting on Jun's other shoulder. Then, Jun is shown on the horse's back, riding off into the distance. It appears that the sun has almost set. After a while, Jun gets off of the horse's back and walks a little bit further. Jun begins to watch the sunset. 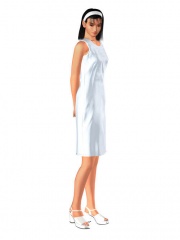 Tekken Tag Tournament is a non-canonical entry in the Tekken series.

Ending (Unofficial Synopsis)
Jun stands beside Jin Kazama, who is laying on the ground on his back. They are in Unknown's stage. She crouches, and it is revealed that Jin has Devil markings on his forehead. Jun touches his forehead, the screen flashes white for a second, and the Devil markings disappear. Jun smiles slightly and stares lovingly at her son. When Jin regains consciousness and rises slightly, which is just a few seconds later, Jun is nowhere to be seen. It is assumed that it was Jun's spirit that healed Jin Kazama.

Jun serves as the first half of the final boss and fights in Solo Mode. When she's beaten, she then transforms into Unknown.

The mother of Jin Kazama, head of the Mishima Zaibatsu. Trained in the Kazama-Style Traditional Martial Arts. What secrets lie behind those sorrowful eyes...?

Mother of Jin Kazama, head of the Mishima Zaibatsu, Jun is also a master of Kazama-Style Traditional Martial Arts. She searches for something with those sorrowful eyes[1].

Jun is seen in the night in a dark area. She closes her eyes and soon various glowing lights appear along with spirits of animals. She opens her eyes and creates a spiral before concentrating all the lights and spirits into a single blast heading for the sky, which then creates stars.

Jun is featured as an unlockable character in the free-to-play online game Tekken Revolution, making the entirety of the Kazama family playable. She was added in the November 26, 2013 update as a part of the Winter Campaign ([1]). As with the rest of the cast, her appearance and moveset are carried over directly from Tekken Tag Tournament 2.

As a child, Jun witnessed Kazuya Mishima being thrown off of a cliff by his father, Heihachi Mishima. She climbed down the cliff to try and save Kazuya but was unable to find him. She was haunted by this experience all through her childhood and into her adulthood. In the present day, Jun is an officer of the WWWC, a wildlife protection organization. She is highly psychic and can sense a mysterious power surrounding Kazuya Mishima (who is revealed to have survived the fall from the cliff).

She is teamed up with police officer Lei Wulong and their assignment is to investigate the Mishima Conglomerate's genetic engineering of bio-weapons, but she is constantly drawn to Kazuya; she can't let him give in to his hatred and kill his father, Heihachi Mishima. After many confrontations, Jun discovers that Kazuya is possessed by the Devil but is able to convince Kazuya to spare the life of Heihachi. The story jumps to the future to show that Jun is living a peaceful and happy life with her son, Jin Kazama. However, she is able to sense something strange in the air (most likely Ogre.) She promises Jin that everything will be alright and the two leave together hand in hand.