From Tekkenpedia
(Redirected from Tekken (2010 Film))
Jump to: navigation, search 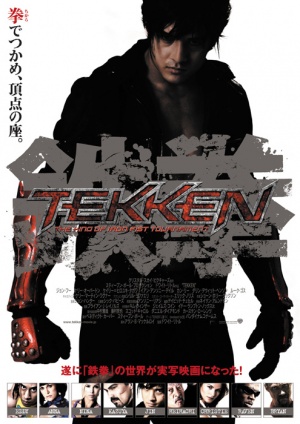 "Tekken - It's the fight of one life"

Tekken is the title of the live action film that was released during March 2010, in Japan. The film is set later on than in the anime film, but is not a sequel or epilogue. The movie is was released on DVD in the United States in 2011 and in the United Kingdom on April 5th, 2010.

The setting of this movie is in the year of 2039. After a series of World Wars, the world is divided into 8 territories owned by 8 corporations: G-Corp; Eyderdex; Valencorp; Vectrocorp; Ruscorp; Ex-Corp; Brikhauser; and Tekken, who gains control of the United States of America. As a form of entertainment, the Tekken CEO Heihachi Mishima hosts the King of Iron Fist Tournament.

The film begins with Jin Kazama running among the streets of the Anvil slum area. After returning home to his mother Jun Kazama, we learn of her disapproving attitude towards the Tekken Corporation and the fighting tournaments. Jin eventually leaves home again to sneak off with his girlfriend Kara. Unfortunately, during a search by the Jack soldiers, Jun's house gets blown up and Jin witnesses the death of his mother.

When searching the destroyed house, Jin finds a Tekken Fighter I.D. in Jun's items. He then goes to a local arena to fight and then defeat the fighter Marshall Law. After the fight, Jin is chosen as "The People's Choice" for the Iron Fist Tournament and meet his sponsor Steve Fox. He also meets and takes interest in the mixed martial artist fighter Christie Monteiro.

Jin nearly beats the brawler Miguel Caballero Rojo nearly to death in his first fight of the tournament. At that night, Jin and Christie sneak out to a nightclub and the two bond. Shortly after leaving Christie to prepare for the next day, Jin is attacked by the assassins Anna and Nina Williams, who were ordered by Kazuya Mishima to kill him. Kazuya is revealed to also have secret plans to take Tekken Corporation from Heihachi. With Christie's help, Jin survives the assassination attempt. Though Steve and Christie warns Jin from the tournament and tells him to leave, Jin states he only participated in the tournament to kill Heihachi, who was believed to be Jun's killer. The next day, Christie is matched against Nina (who Jin discovers is one of the assassins) and eventually wins.

Meanwhile, Kazuya blackmails Bryan Fury (who is the current winner of all the tournaments) to either kill Jin or be exposed as a cyborg, which is stated to be illegal in the tournament. Jin is put up against Yoshimitsu in the quarter-finals. Kazuya gains control of the Jacks and has Heihachi imprisoned, meaning he gains control over the company. Jin then defeats his third opponent while Heihachi trips a security alarm. Kazuya imprisons all of the fighters and later announces that they must fight to the death to win. Heihachi and Raven teams up with Jin, Christie, and Steve to escape, but Raven is recaptured, while rest of them escape to Anvil.

The scene shifts to the semi-final match between Sergei Dragunov wielding a naginata and Bryan Fury. Bryan wins the match by strangling Dragunov to death with the chains he fought with. Heihachi then reveals to Jin that Kazuya raped Jun, then was about to kill her, but Heihachi saved her and moved her to Anvil. Heihachi also tells Jin that he can be the next chairman of Tekken.

The hideout is located by Jacks which results in Steve's death, the recapture of Jin and Christie, the order to execute Heihachi. After returning to the tournament, Jin is forced to fight Bryan in the finals. When Jin kills Bryan, Kazuya sets out to fight and kill Jin himself. Jin is saved when Christie distracts Kazuya. This gives Jin a chance to pin down and wound Kazuya with an ax. Jin does not kill Kazuya after he speaks of the violence between him and Heihachi; Jin states he is a Kazama instead of a Mishima. Christie then grabs Jin's hand and declares him the new Iron Fist champion while the crowd cheers him on.

As Jin goes back to his home, he is saluted by the Jacks and a crowd, including Kara, follows him. Christie narrates explaining that Jin brought hope amongst the people of Anvil, now with a new less rebelious attitude, she says his legacy of Tekken is only the beginning. After the credits, Kazuya is shown walking the streets holding his wound.

Heihachi is about to be executed by a Jack. Heihachi states that "I am Mishima Heihachi. I...am...Tekken. You WILL obey." Then the Jack lowers its gun and accepts Heihachi as his commander once again.

Notable Differences from Game to Film[edit]

Retrieved from "http://eng.tekkenpedia.com/index.php?title=Tekken_(2010_film)&oldid=80459"
Categories:
Login to remove all ads