Angel (エンジェル Enjeru) was introduced in Tekken 2, and made her appearance in the non-canonical Tekken Tag Tournament and Tekken Tag Tournament 2. Angel is a mysterious character, leading many fans to speculate as to who or what she really is, not unlike Unknown, nothing at all is truly known of her. Harada has confirmed however via his Twitter that she is not part of Kazuya's soul[2].

Her title in the original trilogy is Angel.

Prologue
Although Kazuya is seemingly possessed with a black heart, there is still some good left in him. Angel will battle against Devil to save Kazuya.

Ending (Unofficial Synopsis)
Angel sits on the ledge of skyscraper, staring out into the night sky. Suddenly she throws herself off the ledge, becoming engulfed in the fog below. As she falls, the 10 original fighters race through her mind. Then 10 skeletal hands are placed together in circle, as if making a pact. Devil appears surrounded with by skeletons with wings. Angel breaks through the image and soars in to the moonlit sky, orbs of light begin to collect in the palm of her hand that she then sends cascading in to the night. 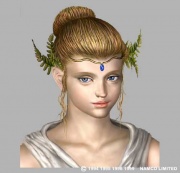 Ending (Unofficial Synopsis)
Devil lays unconscious and defeated on the floor. Angel is standing beside him. She crouches and touches his head. Devil transforms into Kazuya Mishima. Angel smiles. Kazuya regains consciousness, and rises slightly. Angel is nowhere to be seen.

Angel will be featured as a DLC character in the console version of Tekken Tag Tournament 2.

Normally elegant and beautiful, Angel bellows out a deep, manly voice during intense combat. First appearing in Tekken 2 as an opposite identity to Kazuya's devil form, Angel wields the power to purify all evil things. The motions of her standard attacks are feminine and elegant, but when it comes down to the wire, she uses aggressive, rough attacks[3].

Said to be the opposite to the Devil, Angel carries both a compassionate and cruel side[4].

Said to be the exact opposite of the Devil, this elegant being hides a merciless side behind that benevolent face[5].

Angel is flying high in the sky, confronting Devil. Devil starts firing laser attacks at Angel, who repeatedly blocks and deflects the lasers. She then creates a gigantic forcefield of energy, which she sends crashing at Devil. Devil is hit by the impact and begins to burn away as a result. The screen changes and shows an unconscious Kazuya lying face down on the ground, a single white feather floating down onto him.