This image was uploaded by Mkking. My problem with this image is that it looks like Angel in Tekken Tag Tournament, and not Angel in Tekken 2. I've decided to upload this image again and rename it "Image:TTTangel.jpg", a name that is more appropriate. JunKazamaFan 10:26, 1 March 2007 (CST)

I recently removed everything saying that either Jun Kazama may be Angel or Asuka could be the reincarnation of Angel. I also removed the part where it says that fans believe that Angel's appearance may have been based off of Kazuya's mother. My reasons are because it is all speculation, and I highly doubt that any of this is true. Also, I've never heard anything about who Angel's appearance was or may have been based on. If you feel that some parts of this or all of this should be put back into the article, please state your reasons here, and I'll put whatever you want back into the article if I agree with you. JunKazamaFan 05:30, 27 July 2007 (PDT)

Put Them Back In The Talkpage. Tekken Tag Was Never Canonical And It Will Never Be. But, Maybe, It's True. Maybe There Will Be Even More Info...Who Knows, There Maybe TTT 2 Or Info On Angel on A TEKKEN Sequel....Sai 09:23, 7 January 2008 (PST)

In Tekken Forever Angel is a entity within jun out to help her save kazuya's soul. In the first issue,angel is shown trying to revive jun, she puts jun in a dream state showing her the memories of the past in future, in the last scene shows jun transforming into angel, as angel resurrect jun, a third eye is shown on jun's forhead, "AWAKEN!!" Angel shouts as jun become one with her. User: Teriko 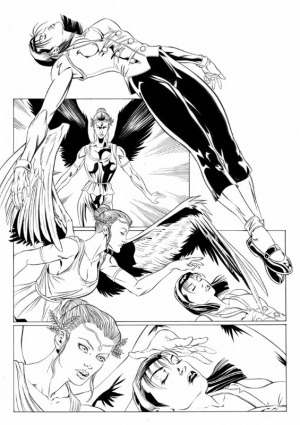 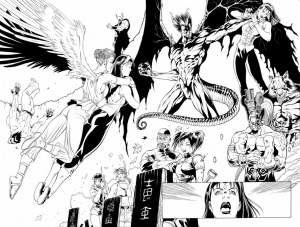 Angle does the same as Devil Jin , but she doesn't like evil like Devil since TTT. She is a beautiful and peaceful angel, but when there's trouble, her ways are increasing her own power( which is dark power). She's new to the next Tekken Tag Tournament which is Tekken Tag Tournament 2, with new techniques of her own. You know Devil and Angel is an funny example of an oxymoron! Just like soft and rough. She might be still secretly evil but most players of her are counting on her because she's beautiful and peaceful( opposite will be in combat to battle). Well that's all people I have to say positive to her because she is a great angel!

Angel also becomes one with Jun to save her unborn son Jin from being possessed.

Hi guys, I have news for u all, before seconds I asked Harada-sensei on twitter about the voice actor of Angel, and he answered me. Her name is Yuka Koyama. Anyone know who is she? I heard about her name many times but I don't know her, I will now added. Any comment? ^_^. Yuukimishima (talk) 07:59, 2 September 2014 (UTC)

Hah, so that was you in twitter. Of course I have a comment: when you paste something important into articles, please, paste the source link with it. About Koyama-san: I too don't know her (from all of the voice actors I know only Mary Elizabeth McGlynn who voiced Nina Williams). By the way, if we talking about voice actors it will be a big pleasure to finally learn who voiced Dr. Bosconovitch. I have been ask Harada-san many times about it, but unfortunately he didn't respond.
Hamachi (talk) 10:10, 2 September 2014 (UTC)