Akuma (悪魔), also known as Gouki (豪鬼) in Japan is a character from the Street Fighter series and is a major antagonist and enemy of Ryu. Akuma is well-known for his strength in the storyline and in gameplay and is famed for his trademark "Raging Demon". He was first introduced as the silhouette that Kazumi speaks to in one of the early trailers for Tekken 7 before his full reveal shortly after the King of Iron Fist Tournament 2015. In-game, Akuma acts as Fated Retribution's secret final boss, occasionally replacing Kazumi. Prior to his playable appearance in Tekken 7, Akuma appeared in Namco X Capcom and was also playable in the crossover game, Street Fighter X Tekken, acting as the final boss in the story mode if the player's lead character was from the Tekken series.

In a recent interview, Harada stated that Akuma's presence in Tekken is mainly due to the desire of bringing in a proper fight for both Street Fighter fans and Tekken fans, and that a fight of such magnanimity could not possibly occur in a spin-off. Harada also jokingly stated that the development team was also a huge fan of Street Fighter, but were dissatisfied by the story; resulting in them creating this version of Akuma.

According to an interview with Michael Murray, Akuma's presence in Tekken should not automatically mean that the universes of both Street Fighter and Tekken are intertwined.

In the Tekken 7's storyline, Akuma aids the lone Kazumi's wish to slay her spouse and her own son due to the fate of both causing widespread chaos and death. 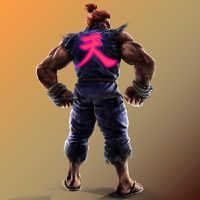 Akuma retains most of his moves from the Street Fighter series, being able to throw out Hadokens (Go, Shakunetsu, and Zanku) that are sidesteppable and Goshoryuken, Tatsumaki Zankukyaku, Hyakkishu, and Ashura Senku. He also retains Messatsu Gou Hadou as his Super Move and the Raging Demon as his Rage Art.

A mysterious fighter… a demon. He finds himself in the middle of the Mishima blood feud by a pre-existing relationship with Kazumi, Heihachi's wife. He makes his debut in Tekken 7 promising to fulfill a debt owed to Kazumi.

With his life saved, by Kazumi, Akuma bided his time with the task of killing the late woman's spouse and son. Finding a good opportunity, Akuma immediately finds and fights Heihachi at the Mishima Dojo. Though the two are briefly interrupted by invading Jack-6s sent by G Corporation, they resume and Akuma defeats Heihachi, sending him several miles from the dojo. With the Mishima Zaibatsu declaring Heihachi dead, Akuma set his sights on Kazuya.

Invading Millenium Tower, Akuma is greeted by multiple armed soldiers, but Kazuya orders them to stand down as they are no match for him. Akuma is led to the rooftop, where he meets and fights Kazuya. In the midst of their fight, Heihachi, who had faked his death, recorded footage of their fight, and Kazuya's transformation into Devil Kazuya, and shoots a laser at both of them. While Kazuya survives the attack, Akuma does not reappear until much later, when Kazuya throws the unconscious Heihachi into the lava of a volcano. Not willing to rest until Kazuya was dead, Akuma and Kazuya fought a bloody battle.

Akuma appeared in Namco X Capcom as one of the enemy characters.

The wielder of the Satsui no Hado, a man called "the master of the fist", who has slaughtered opponents with the ferocity of a demon. He searches for strong opponents to do battle with in a game of life or death. He has sent numerous fighters to their demise. He has a keen interest in Ryu, the disciple of Akuma's brother Gouken, as he has the potential to bring forth the Satsui no Hado from inside him. Because of that, he appears now to guide Ryu to the box in the Antarctic.

Even before the discovery of the meteorite, Akuma felt its presence within his being... Like a voice calling out, the sensation grew day by day, almost taunting him, until finally the voice spoke clearly to him As if it were guiding him, Akuma stood up and faded into darkness... Where he has disappeared to is a mystery to all...

As Akuma walks towards Pandora, he questions if any left would dare to challenge him; Ogre appears as a response. Calling Ogre a "pitiful creature", Akuma challenges Ogre to prove his worth, and assumes his fighting stance in response to Ogre's roar.

Akuma approaches Pandora, but soon encounters a figure of Oni in Pandora Mode. Unfazed by the figure's presence and seemingly defiant nature, Akuma proceeds to state that he will remind the creature of his true power.

Akuma's epilogue revealed that a huge storm occurred at the Antarctic, forcing many of those who attempted to reach Pandora to turn back. Reports from some who were leaving the area stated that a massive crack in the ground appeared that consumed the box and a human-like figure of mass-energy being in the center of the storm. To this day, no one knows the exact cause for the storm or for the crack.