Gun Jack is a character in the Tekken fighting game series. Gun Jack appears in Tekken 3 as well as the spin-offs Tekken Tag Tournament and Tekken Advance. The last two games are non-canonical to the main storyline. During Ganryu's absence in Tekken 3, Gun Jack took some of his unique moves (such as Sumo Stomp). Gun Jack's successor, Jack-5, does not have the unique Ganryu moves that Gun Jack had. Doctor Abel also tried to destroy this Jack robot, using the same method he used to destroy Jack-2, but he failed because Gun Jack generated a force field that protected himself and his creator Jane. Gun Jack also protected Jane when the Tekken Force attacked her inside Mishima Zaibasu Heavy Industries.

His title in the original trilogy is Disordered Killing Monster.

During Ganryu's absence in Tekken 3, Gun Jack took some of his unique moves (such as Sumo Stomp) and also gains a WR+3 side kick.

Prologue (Manual)
Jack-2 is reborn... When Jane, now a physicist, was eight years old, she was rescued from a bacteriological war by the Russian military robot Jack-2. However, Jack-2 was later destroyed by a satellite weapon as Jane, still a young girl, watched in horror. Jane, now 27, could not forget the nightmare of Jack-2 having collapsed beside her. She spent 10 years restoring Jack-2 to 90% functionality, but it seemed to have lost the human characteristics that set it apart from Jack. Jane worked hard analyzing the program in order to return to Jack-2 the gentle soul which had saved her life. Through detailed analysis, she found that most of Jack-2's programming was created by Mishima Industries, one of the subsidiaries of the Mishima Zaibatsu. Moreover, she discovered a hidden program... 'Project Gun Jack'. It laid the groundwork for a new weapon, a pivot gun. In order to restore Jack-2 completely, Jane had to approach the Mishima Zaibatsu and solve the mystery of the project. She quickly installed the hidden program and brought the newly dubbed Gun Jack to the Mishima Zaibatsu.

Ending (Unofficial Synopsis)
A computer with the words "King of Iron Fist Tournament" and a picture of Gun Jack are shown. Jane smiles as Gun Jack awakens. Gun Jack puts Jane on his shoulder and the two go outside. A satelite image closes in on Gun Jack and Jane, revealing Doctor Abel watching Gun Jack and Jane from the image. The satelite then fires a laser at Gun Jack's location, fortunately, Gun Jack is able to block the attack with a force-field, and the two survive. 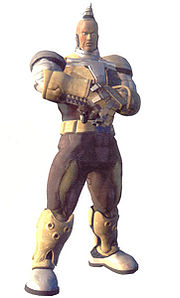 Ending (Unofficial Synopsis)
Gun Jack and Jack-2 practice their moves together. The moves that they perform look like the moves that they can perform during gameplay (such as "Double Axe", "High and Low Cross Cut", and "Cossack Kicks"). The video ends with both of them performing their "Cossack Kicks" with their backs facing the screen. This ending takes place in King's stage.

Tekken Advance is a non-canonical Tekken game containing no plot