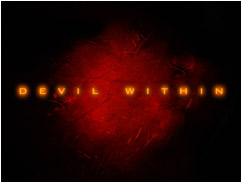 Devil Within is a 3D action adventure side game bundled with Tekken 5. Though the game had a lot to offer from the quality of game play contained, Namco did not market Devil Within as a stand alone product . The storyline revolves around Jin Kazama and his devil form, Devil Jin. It is similar to the Tekken Force modes in Tekken 3 and Tekken 4, but unlike the "Tekken Force" modes, Devil Within does not allow the player to select their desired character and Devil Within has a story line to accompany the fighting, which the "Tekken Force" modes lacked. It is not known if Devil Within is canon or not, but it's stated in Jin's prologue that he sets out on a journey with destiny as his only guide to end the evil that was plaguing him. It can be concluded that Jin's journey was the Devil Within story line. Jin is also the only character in Tekken 5 whose prologue didn't state that he entered the King of Iron Fist Tournament 5.

Just as Heihachi was attacked, someone raided one of the Mishima Zaibatsu labs.

However, the world never found out about that raid.

After the Tournament, Jin searched for a way to rid himself of the Devil Gene.

Then he heard his mother was alive.

Jin learned of a certain foreign laboratory and headed straight for it.

The closer he got, the harder it was to control the Devil. He let down his guard and was ambushed by a squadron of JACKs.

The JACKs overpowered Jin and he passed out. Then the black wings came out...

At this point, Jin hadn't realized what awoke when the Devil came out. 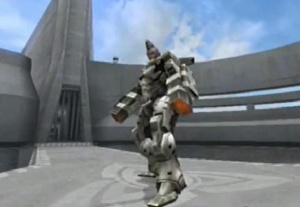 Jin looked around after the fight. Up ahead he saw the logo of G Corporation.

Was G Corporation behind the attack on the Zaibatsu's lab? Jin thought the Tekken Army was finished, but those enemies fought just like them.

Jin found an underground passage and an eerie voice echoed from inside. At the end of the hall, Jin witnessed madness.

Failed experiments that were never quite human were seen in countless tanks.

Jin sensed something underground. Something he knew very well... 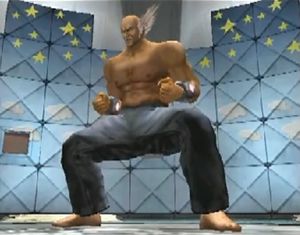 Once Jin saw the G Corporation's Heihachi clone, he didn't want to know any more.

Just as he tried to leave, all the monitors switched on and showed some sort of ruins.

Jin had a bad feeling.

Looking over documents, Jin learned the lab was built on ancient ruins. He also learned what the scientists were after.

Then he saw it.

Jin's nightmare returned. He fought to keep the Devil Gene under control.

An evil shadow slowly took form. The screens flickered for an instant and Jin thought he saw the thing grin. 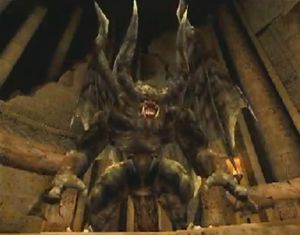 They fought ferociously, but in the end, Ogre disappeared into the ruins.

During the fight, Jin realized that Ogre awakened when Jin became the devil. In order to put an end to his own cursed past, Jin would have to defeat Ogre.

Jin chased Ogre deeper into the ruins. A cold silence hung in the air.

"What is this place?"

Jin was attacked. The enemies, no longer human, were being controlled by the ruins themselves.

After defeating the Ruins' Energy Ball[edit]

Jin wondered what he had destroyed. He felt the power of the ruins fade away.

Then the earth shook and Ogre appeared, much stronger than before. The ruins had been a seal.

Created by those who fought Ogre, these ruins had sealed Ogre from the world.

Ogre went straight for the outside world. The devil inside Jin welled up, hungry for a fight. Then Ogre stopped.

Jin knew that Ogre was waiting for him, calling him to fight, to finish him off.

Jin, straining to control the Devil, headed off for his final battle. 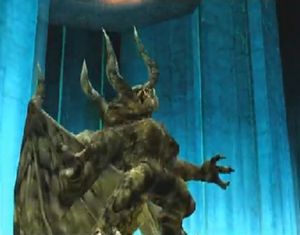 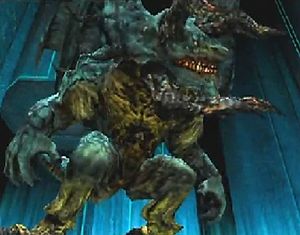 Jin summoned all his strength - all his will - to defeat his nightmare again.

With a deafening roar, Ogre transformed into light and dissolved into nothing.

As the ruins began to crumble, Jin knew that he had fulfilled his duty.

As Jin left the crumbling ruins, he was surrounded by hundreds of JACKs. They came at him with everything they had.

The Devil was hungry for a fight and took over Jin in an instant. Mass slaughter was about to ensue...

As Jin opened his eyes, his mind was comforted by a white light. The light protected him from the evil inside him. His mind was at peace.

Then Jin regained consciousness. The light slowly disappears as he floats into the sky.

After Jin takes a moment to gather his thoughts, he stretched his black wings wide and flew into the night sky. 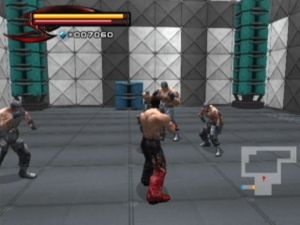 A screenshot of Devil Within's gameplay. 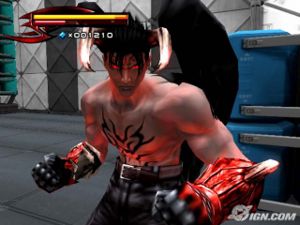 Devil Jin, as seen in Devil Within.

The game contains a total of 5 stages, each of which can be accessed after defeating a stage boss (see the "Bosses" section).

The player controls the character Jin by navigating through each stage overcoming various obstacles in his path such as physical barriers and attacks from foes. All of the game action is contained indoors with the stage arenas consisting of multi-tiered hallways and interconnected passages. Besides the occasional surprise attacks from enemies, there is a strong emphasis on platforming skills. This is an element of game play that occurs frequently throughout Devil Within and increases in complexity as one progresses through the stages. People who play other action adventure games such as Mortal Kombat Shaolin Monks and liked the platforming skills of the characters see that Devil Within is a must have as it presents daunting platforming challenges. In addition, the game play requires some mental agility in accessing and deactivating doorways in order to progress further through each stage.

Despite the game play availability in the different stages, the downside of the game at first glance is the lack of aesthetic appeal. There is no harmonious blend of natural and artificial elements in the arena layouts. In fact natural elements have been omitted altogether. This makes the player feel somewhat imprisoned within these 3D environments as they never see nature. The arenas in Stages 1 and 2 look similar. In Stage 3, the player is welcomed by a change in themes that are Aztec temple ruins. Stage 4 sees another change in theme which looks more mystical with shades of grey and green and appears to look like the interior of an alien spaceship. Stage 5 incorporates the same theme used in Stage 4, however the game play is at a higher level of complexity.

There are also "Devil Symbols", symbols that look like the mark on one of Jin's arms, hidden throughout the five levels. They will unlock costumization items for the characters in Tekken 5 when they are acquired. Jin wears Devil Jin's clothes and gauntlets instead of his own in Devil Within. The reason for this is unknown.

Jin comes with a range of basic and complex moves as well as some special attacks, which can only be executed after transforming himself into Devil Jin. The single press buttons can carry out basic punches, kicks, blocks and jumps. Certain button press sequences will execute throws, combo kicks and punches. He can also carry out a forward roll and back summersault.

The double-jump is a skill that is indispensable and is used through the game play. It takes a bit getting accustomed to at first. It basically involves a synchronised press of the jump button a second time after Jin executes the first jump. This will allow for a greater distance being covered then a single jump alone.

With the special attacks whilst in the form of Devil Jin, he can fire lasers which can take out several opponents at once. However this mode drains his health and needs to be used sparingly.

1. Jin Kazama. The protagonist of this side game.
2. Devil Jin. The evil side / devil form of Jin. Devil Jin is playable by pressing "L1" and "Triangle" at the same time while the "Devil Gauge" is full. The player can also transform back into Jin by doing this.

1. A modified Gun Jack. This Gun Jack is a modified version of the Tekken 3 Gun Jack. It is capable of firing powerful projectiles.
2. Heihachi Mishima clones. These are clones of Heihachi Mishima that use his moves and were created by G Corporation. After defeating the first clone, three others appear at the same time, and the player must fight all three of them at once.
3. True Ogre. Ogre in his true form. Strangely, he doesn't have a snake in place of one of his arms, like in Tekken 3 and Tekken Tag Tournament. True Ogre is capable of breathing fire, flying, and teleporting, which is what he mostly does in the previous games. Sometimes, he will use some of his unique attacks from Tekken 3 and Tekken Tag Tournament.
4. A ball of energy and monsters. A ball of energy that floats around and damages Jin if the player comes in contact with it. However, the ball of energy will usually generate monsters to fight the player. The monsters are similar to the ones encountered in the previous levels before the boss fights. They use punches and kicks to fight.
5. True Ogre and Monstrous Ogre. True Ogre fights and looks the same as he did when Jin fought him at the end of Level 3. Monstrous Ogre is the form that True Ogre takes after being defeated becoming taller and more powerful. It can do everything that True Ogre can, but Monstrous Ogre can create whirlwinds, perform strong stomps, and perform powerful sweeps. Both of these Ogres must be defeated with the same bar of health.

The second time you play Devil Within after completing the quest, you'll be able select stages and collect expensive items (500,000G) from the customize section. To obtain these items, you must go through each stage again and collect the red Devil symbols that are scattered throughout the stages and can be hard to find. They can also be placed above breakable objects, so the player has to be aware when fighting and look around each room first before breaking anything. In total, there are 40 collectable symbols, with each stage containing eight.