Lucky Chloe (ラッキー・クロエ Rakki Kuroe) is the third new playable character in Tekken 7 announced at the "Thanksgiving" event for Tekken series 20th Anniversary at December 7, 2014[3]. Her actions and mannerisms follow that of a cat, and during battle and win quotes, she also occasionally adds a "Nya", the Japanese equivalent for meow. In her win quotes, she also speaks with broken English in a Japanese accent. Based on her appearance and behaviour, she seems to based off Japanese idols. According to Harada, she is not actually Japanese, but is a culture freak instead[4]. She was designed by Yūsuke Kozaki.

Due to the negative feedback of the character in the west, Harada has stated via Twitter[5][6] that he would replace her with a "well-muscled, Skin-head, Very powerful attack" character and that Lucky Chloe would be exclusive only for East Asia and Europe regions. It was later revealed that Harada did not intend for the tweets to be taken seriously.[7] 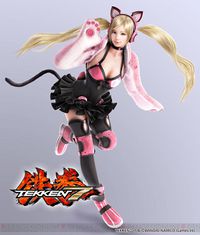 Fitting her unusual and peculiar style, Lucky Chloe's command list surprisingly contains multiple "on hit" timing or cancels. Harada himself also acknowledged that Chloe's one of the more difficult characters to learn among the newcomers.

Her command list contains a few attacks and animations that previously belonged to both Christie and Eddy. Whether this is just a coincidence or if Chloe is linked to either two is unknown.

As a child, Chloe's parents took her to an Expo and exposed her to the Japanese Idol culture and since then, she has always wanted to be an Idol. With her good looks, she set out on being the world's best Idol and named herself Lucky Chloe.

Donning her cute costume, she went out to show the world her dance moves and put other pros to shame. She quickly became world famous when her dancing became viral on internet video sites. (However, North Americans hates her)