Slim Bob is one of the DLC characters for Tekken Tag Tournament 2, released on October 9th, 2012. His character has a similar fighting style with his obese counterpart with an almost identical move-list and slightly different range, and some of his moves that require a relatively large weight have changed. Often, he complains that he does not have enough weight.

*only in Bob's ending

Bob became famous after winning the King of the Iron Fist Tournament 6. He was seemingly showered with never-ending popularity, with interviews that came day or night. Without noticing, he becomes slimmer. The "Slim" Bob is shown in a weight-room measuring his weight. Only reaching around 155 lbs. (70kg), he becomes frustrated. Unsatisfied with the results, he steps back on. The scale has the same results. Even more infuriated, he starts to beat his head against the wall, then becomes exhausted and lies down. 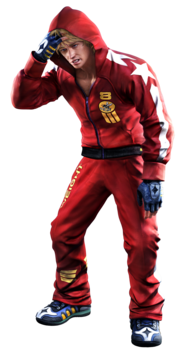 Slim Bob will be featured as a DLC character in the console version of Tekken Tag Tournament 2.

Slim Bob shares the exact same movelist with Bob, though with a small speed increase, and a slight range decrease. Other differences include:

With the dream of becoming a gifted fighter, Bob was popular among his fans for his handsome looks. His tournaments were always sold out, and his popularity was skyrocketing to the top... and yet he was still unsatisfied, refusing even to acknowledge the fans that came up to congratulate him on the street. Despite his tremendous popularity, Bob felt like he had nothing to be happy about.

Slim Bob in "disguise" is in a subway station. He sees a gang of thugs robbing an elderly man. He rushes over saying, "Speed... And Weight!" Once he gets over there to stop the criminals, his pants, which are too big for his small body, start to fall. Slim Bob pulls them back up, and the thugs start to mock him. He proved to them by beating them up with his agility and "weight." Once done, the elderly man thanks him. Slim Bob then hears a plea for help. He sees that a girl is on the subway tracks. Once he saves her life, he hides in between the rails, where it looks like the train ran over him. After he gets back up to the platform, he realizes that the girl accidentally unmasked him. Almost embarrassed, the girl then gives him a kiss on the cheek. When leaving the subway station, his pants start to fall again, then he groans.