Gon (ゴン Gon) is one of the two bonus characters in Tekken 3, along with Doctor Bosconovitch. Gon is a fictional tiny dinosaur and the title character of a classic Japanese manga, created by Masashi Tanaka. Gon features the completely wordless adventures of the irascible title character as he interacts with the natural world, depicted by Tanaka in lush, realistic detail. Gon did not appear in any other Tekken game.

Tanaka (Gon's creator) has said, "This work contains no dialog or onomatopoetic words. People always ask me why I have done this. From the beginning, I didn't think it was necessary. Manga should be without grammar. I also think that it is strange to give animals human language and make them talk. What I set out to do with Gon was to draw something that was more interesting than anything you could say in words. Manga still has great potential that does not exist in other media. I plan to continue developing the art of expression on paper." 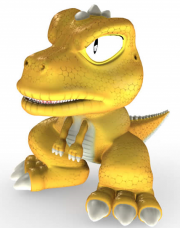 Gon is a licensed character appearing in Tekken 3. He is unlockable by defeating him in the Tekken Ball mode, and he is one of two special hidden characters, along with Doctor Bosconovitch.

It is unknown if Gon's appearance in Tekken 3 is canon or not.

Ending
A dolphin flies out of the water and Gon is on its back. The dolphin hits a whale and Gon is shot into the air by the whale's water spout. Gon lands on the island and is running through it uncontrollably, hitting a wolf that is about to eat a raccoon. Gon passes by a bear and steals its fish, eating it when it lands on a puma. The puma runs to the edge of the island, where Gon is launched off, landing on a sea bird (most likely an albatross, judging by its size). As Gon is flying, it seems as though the bird is no longer supporting him; realizing this, Gon falls into the water. The ending repeats it's self until the player inputs any command, hence the name "Loop."

Gon shakes its head to the left and to the right a few times while crouching so that its head is touching the ground. Gon's tail is raised up slightly, as well. Finally, Gon raises its head, lowers its tail, and goes into its fighting stance.

1, 2, 3, or 4: Gon beats on its chest with its fists, closes its eyes, and falls to the ground on its back a short while later, while continuing to beat on its chest until the end of the win animation.