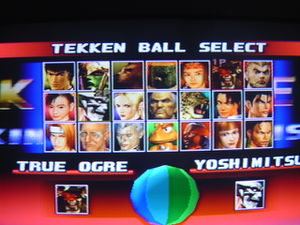 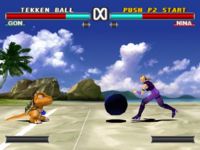 Gon versus Nina Williams in Tekken Ball. The Iron Ball is being used.

Tekken Ball is a side game in Tekken 3 and the Wii U Edition of Tekken Tag Tournament 2. The player chooses a character and the type of ball that will be used. The choices are:

The player's opponent will be chosen by the computer. The goal is to completely deplete your opponent's health bar and knock them out. This is done by hitting the ball with a powerful attack or by making the ball fall to the ground on your opponent's side. However, unblockables do no damage, and will make the ball carry an exclamation mark instead of the damage amount. After a victory, the victorious character will perform one of their win animations.