Ganryu (巌竜 Ganryū) first appeared in the original Tekken. He is a sumo wrestler who was the youngest to achieve the Yokozuna rank. He was later caught fixing fights in his favor and blackballed from the sport. Ganryu then turned to crime and Heihachi hired him as a henchman in Tekken. He faced off against Yoshimitsu in the King of Iron Fist Tournament, but the ninja won and stole his ill-gotten money.

In Tekken 2, Ganryu was hired as a henchman again, but this time worked for Heihachi's son Kazuya. During this time, he fell in love with Michelle Chang whose mother he kidnapped under Kazuya's orders to get her amulet. Michelle did not feel the same way about him. Michelle is depicted turning him down in Tekken Tag Tournament, both in his ending and when the two are paired together. After retiring, Ganryu builds a sumo stable to forget about her. This is part of the reason why he wasn't in Tekken 3 or Tekken 4

His title in the original trilogy is Raging Sumo Wrestler. 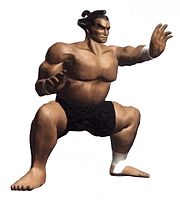 Prologue
Ganryu, a gifted Rikishi, was the youngest sumo wrestler in the history of the sport to be promoted to Oozeki (champion). He was also, without a doubt, the strongest wrestler in the world of sumo, but due to his unacceptable conduct outside the ring, he failed to uphold the dignity prized by the Sumo World, and as a result, was not promoted to the rank of Yokozuna (Sumo Grand Champion).

Consequently, Ganryu separated himself from the World of Sumo and entered a world quite the opposite.

Prologue
Ganryu is a sumo wrestler of great merit. He is also the youngest fighter ever to gain the "Ozeki" rank. Once this title was gained, many who watched the sport (including a certain bandit leader, Yoshimitsu) thought Ganryu would reap the rewards and challenge for the title of "Yokozuna", a title he was more than capable of winning. However, his immoral style (such as starting bouts with fire breathing and a fanfare whilst taunting his opponents, coupled with his bad gambling habit) lead to a dishonorable discharge and gave Ganryu the chance to join the crime world. This path of life lead Ganryu into pursuing one overriding purpose: to become the world's strongest man in a move that he feels is just and honorable. This, of course, lead to his arrival into the first King of Iron Fist Tournament, where he was defeated by a one-time fan, Yoshimitsu. Noticing his skill, Kazuya Mishima hired the sumo once he retook the Mishima estate, paying him more than enough to feed his gambling addiction. Ganryu is participating in the second tournament mainly as Kazuya's bodyguard, but he also has another motive: so that he may express his love for a Native American girl called Michelle Chang, whom he fell in love with after seeing her movements and physique.

Ending (Unofficial Synopsis)
Ganryu is standing in a sumo wrestling arena. After nodding at the screen, Ganryu does some sumo moves. The scene ends with a close-up of a photograph of Ganryu. 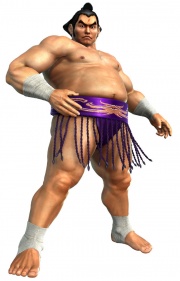 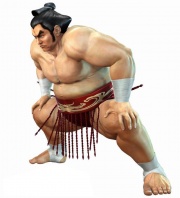 Prologue (In-game Text)
Ganryu. The youngest sumo wrestler ever. Once Ganryu retired, he opened up his own sumo stable to forget about his love, Michelle Chang. One day while Ganryu was watching the previous tournament, he saw a girl just like his old love. Julia Chang. Julia was trying to reclaim her research on forests from the Mishima Zaibatsu. The Ganryu learned of the King of Iron Fist Tournament 5. Ganryu filled with hope says, "What a coincidence! Someone must like me up there. If I get the research files I'll win the lovely Julia's heart!" Ganryu, now 55, enters the Tournament.

Interludes (Unofficial Synopsis)
Stage 4 Julia Chang: Ganryu encounters Julia Chang and does not know whether he should lose against her (although, she may not win the Tournament) or if he should beat her and win the Tournament in order to give her the Forest Rejuvenation Data. Julia, a bit bewildered about Ganryu, tells him to get on with the fight. Ganryu agrees, stating that her wish is his command, which makes her feel uncomfortable. After winning, Ganryu apologizes, saying that he did this all for Julia, "his love."
Final Stage Jinpachi Mishima: Ganryu meets Jinpachi Mishima and asks him where the Forest Rejuvenation Data is. Jinpachi angrily tells him to go away, but Ganryu declines, telling Jinpachi that he will show him why in over 300 years of sumo history, only 88 Rikishi's have made it to Yokozuna rank. Ganryu slams his foot on the ground (into his sumo wrestling stance), shaking up everything. After defeating Jinpachi, Ganryu cries tears of joy, since after being a Rikishi for 42 years he has finally won a championship. After enjoying the sweetness of winning, Ganryu realizes that he had forgotten the Forest Rejuvenation Data.

Ending (Unofficial Synopsis)
Ganryu is looking at a body of water with a small bridge going over it. Text on the screen says, "Ganryu wins and is successful in retrieving the Forest Rejuvenation Data. He will now give Julia the data and confess his love." A ship is coming on screen from the right side (the side that the small bridge is on). Julia Chang runs up to him from the left side. Ganryu takes the Forest Rejuvenation Data out of his mawashi, and then he dusts it off a little bit. He gives the Forest Rejuvenation Data to Julia. Julia says, "I... I can't thank you enough. With this, I'll be able to bring back the forest." Then, Ganryu tries to confess his love to Julia. Suddenly, he pulls out an engagement ring held in a small box while yelling, "I'm in love with you!" However, Julia has unfortunately left, and she has apparently not heard him. A boat passes by on the body of water, coming from the right side. Ganryu says, "Julia?...", and then he opens his mouth in disappointment and shock. 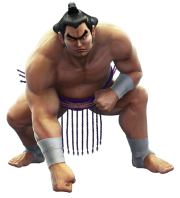 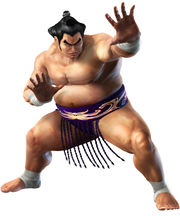 Prologue (In-Game-Text)
During The King of Iron Fist Tournament 5, Ganryu lost his way and stumbled upon the Mishima Zaibatsu's laboratories. Within it, he found a disc containing research data concerning a Reforestation Program. He hoped Julia would agree to marry him if he brought her the data, and he proposed to her. However, Julia turned him down and left with the disc.After that, Ganryu returned to Hawaii and opened a restaurant called “Chanko Paradise.“ But the restaurant did not do well and Ganryu found himself in financial distress. It was then that he discovered news of another King of Iron Fist Tournament. He decided to participate in the tournament in order to advertise his restaurant, “Chanko Paradise.”

Ending (Unofficial Synopsis)
Ganryu has just defeated Azazel and takes the orb out of Azazel's body. As Ganryu gazes at it a strange wave happens and Ganryu is injected with the Devil Gene leaving him with horns, wings, long nails, and even the Devil Mark on his back. Devil Ganryu attempts to fly away but is unable to because of his weight and he reluctantly says, "But I can't fly?!" 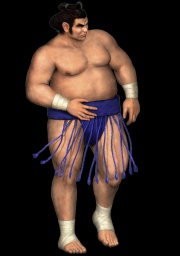 Ending (Unofficial Synopsis)
Ganryu walks up to Michelle Chang, crouches, and offers her some flowers. Michelle is disinterested, so she walks away from him. Ganryu opens his mouth in shock and disappointment. Still crouched, Ganryu puts one of his hands over his head, and then he lowers his head. This ending takes place in Ling Xiaoyu's Tekken Tag Tournament stage. 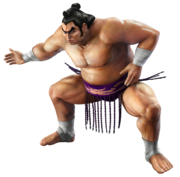 The team of Ganryu and JayCee.

Ganryu will be featured as a playable character in Tekken Tag Tournament 2.

Story (From Wii U Edition')

Once the youngest ozeki sumo wrestler in history, Ganryu gained popularity and fame. Hoping to live out his retirement in elegance, he opened a sumo stable in Hawaii. Even the bitter memory of being rejected by Michele Chang became a thing of the past. One day, he caught sight of Julia Chang, who resembled Michelle in her youth, and he was instantly smitten but his proposal was rejected. After that, Ganryu opened a restaurant called "Chanko Paradise", but the restaurant did not do well and Ganryu thought up a plan to advertise his restaurant to the world[1].

Ganryu is walking down a corridor. He passes a door and sees Jaycee's mask on a table. Peeping through the gap between the door and its frame, Ganryu studies the showering Julia to check if it's her or not. As he edges closer and closer to the door, he suddenly finds himself in handcuffs and is arrested by Lei Wulong for voyeurism, despite his cries of innocence.

Ganryu is briefly featured in the first half of Tekken: Blood Vengeance, voiced by George C. Cole (English)/Hidenari Ugaki (Japanese). Here, he serves as a gym teacher at Mishima Polytechnic High School. Just as Xiaoyu and Panda arrive, Ganryu is there waiting for them, where he summons Xiaoyu to the principal's office to inform her that she's been expelled and transferred to Kyogoku Academy. At first, she believes it's only because he considered her to be late, but Ganryu goes on to tell her that it's because she's cost the school three hundred grand in gym repairs, saying that she destroys something every time she goes to P.E. Additionally, he comments on her flunking every subject and having a complete lack of discipline. As he asks the "principal" what's next, the chair turns to reveal Anna Williams, who throws a dagger straight at Xiaoyu's head, which she evades with a backflip kick. For the rest of the scene, Ganryu silently watches on in the background as Anna assigns Xiaoyu with the task of gathering information on Shin Kamiya. He is no longer seen afterwards.

Retrieved from "http://eng.tekkenpedia.com/index.php?title=Ganryu&oldid=83269"
Categories:
Login to remove all ads