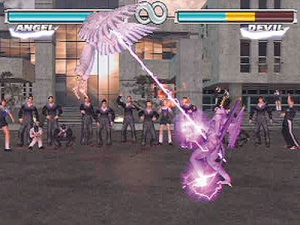 Mishima High School, officially Mishima Polytechnical School, is a school in the Tekken series. It was founded by Heihachi Mishima as a part of the Mishima Zaibatsu conglomerate, and as such, has a giant golden statue of Heihachi Mishima on its grounds. Jin Kazama, Ling Xiaoyu, and Miharu Hirano are among the people that attend this school (although, as of the end of the third Tournament Jin stopped attending). The school, like other Japanese schools, enforces a school uniform dresscode, which appears as the alternate costumes of both Jin and Xiaoyu in Tekken 3 and Tekken Tag Tournament, and in Xiaoyu's case, Tekken 4 as well.

The school appears in both Tekken 3 and Tekken Tag Tournament as a backdrop in one of the stages, with several Mishima High School students standing in a circle in the school yard, cheering the fighters on.

It is also commonly believed that Lili's, Panda's, and Asuka's Tekken 6 endings take place in front of the school's main entrance. The dialogue and actions of Lili and Asuka in the endings seem to imply that they have recently transferred to the school, but there is no conclusive evidence to support this thought. Furthermore, the lack of the school's nameplate and Heihachi statue, as well as the changes in the structure of the gate and school buildings, casts doubt on whether or not it is Mishima High to begin with and opens the possibility for it in fact being Asuka's school or something third entirely. It should also be noted that in the console opening movie, Lili and Asuka also fight here but they are here fighting in their default outfits and not school uniforms, Lili's limousine is not present, and the gates to the school are locked.

This school is one of the stages in Tekken Tag Tournament 2.