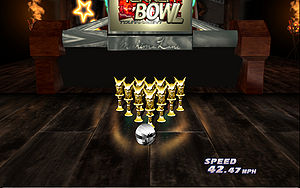 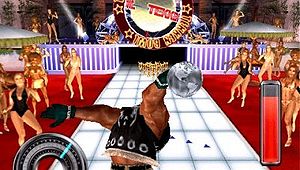 Tekken Bowling is a side game in the Tekken series. It first appeared in Tekken Tag Tournament, and it returned in Tekken 5: Dark Resurrection.

In Tekken Tag Tournament, the player chooses a tag team of two characters and bowls with them. The first tag team member goes first. If that character doesn't get a strike, then the second tag team member must try to knock the remaining pins over. In Tekken 5: Dark Resurrection, the player chooses one character and bowls with them. After a strike, your character or characters will perform an animation, which is usually a 'win' animation.

In July 2011, the game, titled Tekken Bowl, was released as a stand-alone game, exclusively for the iOS operating system. The app is free to download from iTunes, but requires iOS 4.1 or later to be able to run.