Doctor Geppetto Bosconovitch (Russian: Доктор Джепетто Босконович), also referred to as Doctor B., is a character in the Tekken series. He, along with Gon, are the 2 bonus character of Tekken 3. He is only a playable character in Tekken 3 and Tekken Tag Tournament 2, so far, though he makes an appearance in almost every game. Doctor Bosconovitch's Tekken 3 ending is the same as Yoshimitsu's Tekken 3 ending.

Doctor Bosconovitch was kidnaped by Kazuya Mishima in the run-up to the King of Iron Fist Tournament 2 and was forced to work for him. Some of the many projects involved the creation of the bio-weapons Roger and Alex, as well as the completion of the Prototype Jack unit. After completing his tasks, and before being executed, Doctor Bosconovitch is rescued by the friend he helped save previously, Yoshimitsu.

Doctor Bosconovitch was a leading scientist of the former USSR. At the age of 12, he designed a new type of ballistic missile and instantly became famous in the scientific world. After losing his own daughter, Alisa, Bosconovitch has been doing research on human resurrections and cold-sleep machines. Through these experiments, he became active in cloning and the creation of androids, such as Jack. With no sense of good or evil, he works only to somehow revive Alisa.

While not a playable character in Tekken Tag Tournament Doctor Bosconovitch can be seen in the crowd of people cheering in the minigame, Tekken Bowling. It is even possible to "take him out" using a bowling ball.

Doctor Bosconovitch appears in Bryan Fury's Tekken 4 ending. In it, he explains to Bryan that he will now mechanize him and allow him to be completely reborn in a new incarnation. Bryan lays supine in the chair and Bosconovitch holds a gun-shaped device containing sleeping gas. Bidding him sweet dreams, he injects the gas into Bryan. Throughout, he speaks in a very gentle, paternal tone and is very calm.

Although he does not appear in person in Death by Degrees, Nina Williams' spin-off game, he is mentioned several times in journals and documents, and he has a laboratory on the Solitaria Penitentiary island, although it's abandoned. In Lukas' journal, Lukas shows resentment towards Bosconovitch, as Bosconovitch gets all the attention and they are shutting Lukas down, and he takes "that souvenir Bosconovitch left behind" to aid him in his plans to make the people that shut him down pay. Bosconovitch is the creator of Type J and the J Robots. Inside his locker in his laboratory is a document titled "Type J" report, detailing testing of Type J's abilities. In it, it states that the cranial area fell short of specified modifications, due to an emphasis on weight reduction, so a strong shock to the cranial area places great stress on the sensors. In the worst case scenario, the A.I. unit could be destroyed. "Therefore it is of utmost importance that we implement a fix at once...".

While breaking into the Mishima Zaibatsu's vault, Yoshimitsu found an injured Bryan Fury, and he brought him to Doctor Bosconovitch. Bryan entrusts the doctor with giving him a "perfect" body. However, the doctor found Bryan's body too complex, and he instead installed a perpetual generator. Bryan proceeded to attack the doctor, as well as Manji Clan members who were with him. He did survive the attack but was severely hurt. When Yoshimitsu arrived to visit Doctor Bosconovitch, he finds the lab in ruins, and his comrades dead. Seeing this, Yoshimitsu vowed vengeance on Bryan, so he entered The King of Iron Fist Tournament 5.

His title in the original trilogy is The Creator.

*as a background character in the Tekken Ball mode 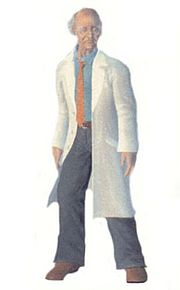 Tekken 3 screenshot: Doctor B. VS Doctor B.

Prologue (Manual)
Dr. Boskonovitch was a leading scientist of the former USSR. At the age of 12, he designed a new type of ballistic missile and instantly became famous in the scientific world. After losing his own daughter, Boskonovitch has been doing research on human resurrections and cold-sleep machines. Through these experiments, he became active in cloning and the creation of androids, such as Jack.

With no sense of good or evil, he works only to somehow revive his daughter.

During the first King of Iron Fist tournament, he was captured by Kazuya Mishima and was forced to do genetic research pertaining to martial artists. However, he was also able to created a new type of cold-sleep machine. He is responsible for saving Yoshimitsu from death, and Boskonovitch himself was also saved from the Mishimas by Yoshimitsu.

Now, Boskonovitch is infected with a mysterious disease. In order to cure himself and to revive his daughter, he needs the blood of the fighting god. He is the only man in the world who knows the truth behind the mysterious fighting god in this tounament. 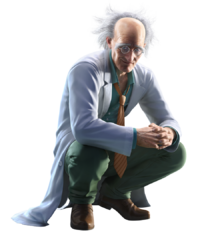 Dr. Bosconovitch is featured as a DLC character in the console version of Tekken Tag Tournament 2.

Doctor Bosconovitch is seen using crazy and weird tactics and inventions, such as electricity and fire, as his fighting style. Bomb detonations accompany many of his stronger moves. Unlike in Tekken 3, Bosconovitch now has the abilities to run, jump, and stand up properly. His main stances are "Mad Pain" (which he enters after certain moves connect, such as 2,4), "Panic Doctor" (f+3+4), "The Zen" (d+3+4), and "Electric Charge" (3+4). He no longer suffers from falling after the majority of his moves, though he can immediately drop to the ground with "Trick Fall (d/b+3+4) and "Surprise Tumble" (d/f+3+4), and a good deal of his moves still end with him lying flat on his back or stomach. In these cases, pressing 2 will bring Bosconovitch back up to a standing position via a bomb detonation. Also, if lying on his back, pressing 3+4 will put him into "The Zen" stance.

A genius scientist from Russia, who excels in a wide variety of fields. After facing the passing of his daughter years ago, he immersed himself in his work on regeneration and cryogenic sleep. His experience with cloning and robot engineering led him to create the line of military robots, the JACK units. He goes about his work with little regard for what is considered "good" or "evil", aiming only to revive his lost daughter. He owes his life to Yoshimitsu after he was saved by him[1].

Doctor Bosconovitch is seen working at a computer, studying the data of the Mishima family, in particular, Lars, Heihachi, Jinpachi, Kazuya, and Jin. Linking up Jin and Kazuya's profiles together, Boskonovitch dismisses them, and focuses on the shared link between Jinpachi, Heihachi, and Lars, with somewhat dramatic music in the background. Although at first glance, Bosconovitch appears to be studying how between the age of 20 to 50, they grow stronger with age... the pictures abruptly focuses on the top of their heads, showing the lack of hair on the two older Mishima males, hinting it is hereditary. The screen cuts to Lars with Tekken Force soldiers in a helicopter, with Lars requesting one of the soldiers to close the window as the wind is blowing into his hair.[1]

Dr. B in the Motion Picture