Bruce has worn kickboxer shorts throughout all Tekken games as his Player 1 outfit, while his Player 2 outfit changed rarely. He always has the same tribal tatoos on his chest and back and the same hairstyle.

Bruce was one of the new Tekken 2 sub-boss characters, so he had two almost identical outfits. 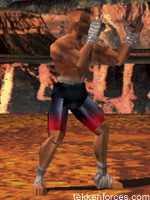 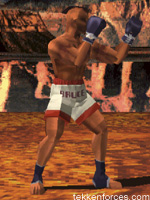 In his Player 1 outfit (selected pressing one of the punch buttons) Bruce wears navy blue trunks with red flame drawings on them. He also wears hand and foot wraps.

In his Player 2 outfit (selected pressing one of the kick buttons) the trunks are white with red stripes and the red writing "Bruce" on them. He also wears black foot wraps and black boxing gloves instead of hand wraps. His Mohawk is in a ponytail. 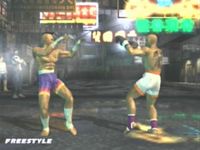 There are just little differences in his outfits: in his Player 1 outfit his hand and foot wraps also cover his forearms and calfs and his trunks color is now purple with red,orange and yellow flame designs; in his Player 2 outfit his ankle supports are purple instead of black.

In Tekken 5 Bruce returns with a new Player 2 Outfit and an unlockable Player 3 outfit in the PlayStation 2 version. 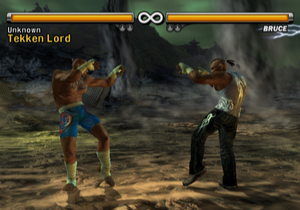 Player 1 outfit: His Player 1 Outfit is updated and is now blue. It also has red, orange and yellow designs/flames on them.

Player 2 outfit : Bruce's new Player 2 Outfit consists of a black jeans, brown boots, a white tank top and hand wraps. He also has white designs similar to his tatoos on the tank top and jeans.

His Player 3 Outfit (bought in the customization area is selected by pressing the right punch button) is a Muay Thai classic style fighting uniform. It consists in blue trunks, a golden belt, white hand wraps, orange bands around his ankles and traditional Prajioud around his arms and head. 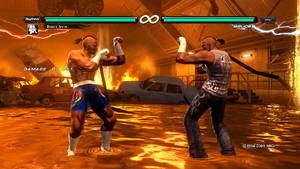 Like most of the other characters, Bruce receives no new default costumes.